Typhoon Texas, one of the largest privately-funded waterparks to open in North America in the last ten years, has opened with unique experiences for guests including Splash Cinema, a Thursday evening movie night within the park, or the weekly summer camps that promise to entertain kids all summer long with games, arts & crafts and ecological experiments. 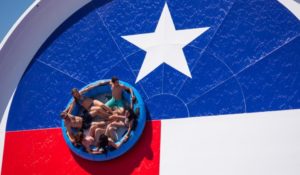 The park’s water rides and attractions have been provided by WhiteWater and include a Boomerango wall on the Texas Twister that is complete with the flag of Texas.

Also debuting at Typhoon Texas Waterpark is North America’s first Fusion AquaSphere + Constrictor waterslide which will be equipped with six-person rafts allowing the whole family to brave the monster ride together. The iconic waterslides, interactive play structures and wave pool equipment were all developed in partnership with WhiteWater.

“When you’re inside the Fusion AquaSphere + Constrictor, which we’re calling ‘The Typhoon’, it’s absolutely amazing and so much wilder and enormous than you expect. Once we turn the water on, this monster slide is going to do nothing but create screams and smiles on the faces of our guests here at Typhoon Texas,” says Steve Mayer, Director of Marketing of the West Houston destination.

The 25-acre waterpark in Katy, Texas will draw locals from all over the region, supporting those in the greater Houston area to battle the scorching summer heat with an assortment of thrilling waterslides, a 25,000-square-foot wave pool, a snaking lazy river and a dedicated kid’s area. But that’s not all. Dalton, Hlavinka and DeLaughter had a vision to create a waterpark that made guests feel at home and are putting their 900 seasonal employees through tough screening and training to make sure every guest receives the best service possible. 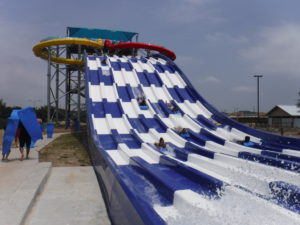 “Working with (founders) Keith Dalton, Terry Hlavinka and Ray DeLaughter has been inspiring as their dedication to the project can be seen through every step we take with them. They’re pushing the boundaries in delivering unique experiences to their guests matched by a passion to offer exceptional customer service. The result is going to be astounding,” said Scott Haycock, VP Business Development, WhiteWater.

WhiteWater has also scored a notable success with Cedar Fair as the company rebranded its Boomerang Bay operation as Carowinds Carolina Harbor. New attractions include Blackbeard’s Revenge, a slide tower with six winding and twisting waterslides, is the main addition to the park doubling the total number of exciting waterslides available for guests to ride. Nearly identical slide towers can be found at four other Cedar Fair waterparks throughout the US including the recently completed Tropical Plunge complex at Kings Island Soak City Waterpark.

“Carowinds was looking for a good balance between family fun and thrills at Carolina Harbor. The recent additions of Blackbeard’s Revenge, a new six-storey tall water slide complex with three exhilarating attractions, and Seaside Splashworks, a multi-level play structure with over 80 play elements and a giant 423-gallon tipping bucket that soaks everything in its path, does just that,” explained Rob Decker, Senior VP of Planning and Design, Cedar Fair Entertainment Company.

The waterslides aren’t the only splashtastic attractions coming to Carowinds this summer. Seaside Splashworks is an AquaPlay RainFortress covered in detailed theming and is part of the new two-acre family area within Carowinds. The enormous multi-level play structure features over 80 interactive elements and topped with a 423-gallon tipping bucket.

“Our goal was to help Carolina Harbor bring the coast inland with Seaside Splashwords. Theming is a magical way to take a product that can be found in waterparks throughout the world and make it truly unique for that one park. We are happy to have worked with Carowinds to deliver a distinctive AquaPlay that will ignite the imaginations of thousands of kids, mums and dads this summer,” said Teri Cantin, Landscape Architect and Lead Designer of Seaside Splashworks, WhiteWater.

SUZOHAPP has a grand experience at Valencia’s EXPOJOC

Omni Arena has best show ever at IAAPA Expo 2021