By RDungan On May 16, 2017 982
Polin Waterparks has been named as one of Europe’s top import/export companies in the Grand Final of this year’s European Business Awards sponsored by RSM, at an awards ceremony held in Dubrovnik.
The firm was selected as one of the top ten in Europe for the Import/Export Category which included more than 33,000 companies from 34 countries at the entry stage in spring last year.

During the year, it was chosen as a National Champion, took part in a public vote that generated almost 250,000 votes from people across the globe, and was named a Ruban d’Honneur finalist in February. .

Basar Pakis, general manager of Polin Waterparks, said: “We are extremely proud to be chosen as one of the top businesses in Europe. This is a major accolade for us and our country as The European Business Awards programme is widely recognised as one of the most challenging competitions in Europe presided over by an esteemed panel of judges.” 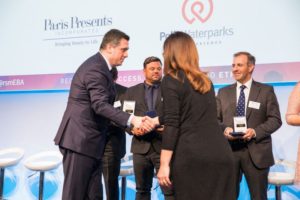 Adrian Tripp, CEO of the European Business Awards added:”These companies are Europe’s best. They demonstrate innovation, ethics and financial success and are brilliant examples of the growth potential for European business in a competitive global marketplace. Together they are creating a better future for us all. Huge congratulations to Polin Waterparks for their success.”
featuredPolin
982
Share FacebookLinkedinTwitterGoogle+WhatsAppPinterestEmailTumblr