A league of their own

In the US, tournaments and leagues have long been a popular way for game enthusiasts to add a human competitive element and also happen to be a great way to bring people into your attraction. Sharon Harris explains more….

Since the 1970s, economic downturns, competition for leisure dollars, new technology and changing demographics have compelled innovative amusement operators to reinvent their businesses. During the past four decades, smarter coin-op companies have diversified and launched league programs to continually attract new customers and ensure regular play.

Because bowling and sports leagues have long existed in American life, industry leaders recognised they could apply those same successful methods to their own route operations. Organised domestic and international coin-operated league play would broaden the games’ appeal and increase their profitability.

In the US, particularly in Middle America, two coin-operated leagues have proven their staying power over 40 years. Unlike other leisure activities or sports, both require little customer investment except coin play and personal supplies. As a social and competitive experience, team camaraderie and close proximity to local competitions motivates players to remain in the league.

The initial 2,500 player roster now exceeds 300 amusement charter holders that sanction 100,000 players. They compete in at least 1,400 leagues at 10,000 locations. These sites span 400 municipalities across almost all 50 American states, plus six Canadian provinces and 10 additional countries.

Statistically, these men, women and junior players practice two-three times weekly. That totals more than 10 million games in their home towns and at the annual Las Vegas Tournament.

Trying to replicate the VNEA’s successes, the national Amusement and Music Operators Association (A 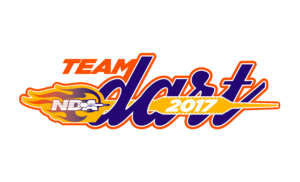 MOA) created the National Dart Association (NDA) in 1986 to promote organised, consistent soft-tip dart play. With its manufacturer sponsors, the NDA created standards of play and national tournaments, along with establishing a central administrative office.

The NDA sanctions more than 56,000 players each year who participate in dart leagues operated by 250 international charter holders in 10,000 locations. To further serve its members, the NDA offers instructional webinars for successful league operation.

“Advancing technology over 31 years has streamlined and expedited the tournament process Our greater numbers this year reflect our shortened competition schedule-from nine days down to six-in 2016. This action brought a renewed interest and financial ability to participate,” says Kelleher. 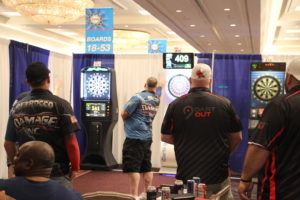 Both VNEA and NDA must also credit their positive results to ever-improving tournament software from CompuSport of Quebec, Canada. The small company has revolutionised the tournament and league operation of multiple trade associations.

CompuSport President Nil Gaudet and Vice President David Bouchard, university research centre friends and colleagues, set out to develop computer tournament software that would maximise efficient user play in 2004. What began as a sideline to their regular jobs evolved into a full-time professional commitment.

Gaudet, himself a pool player who loves the social interactions of competition, began the project with a small local pool league in 2009.

He says: “That year, we tested our original tournament software in a first effort to move between theory and practical application. Our technology backgrounds made us want to perfect our website as a tool before offering it to outside leagues and we always welcomed customer feedback.

“By 2011, we traveled three hours to a small 30-table tournament using our program in London, Ontario. There, a charter holder knew then-VNEA tournament director Gary Benson, who was impressed with our software. By beginning in a limited situation, we could combine ideas for a more user-friendly experience if the VNEA chose us as their tournament software supplier, which they did. By 2013, the NDA decided to also use our programs within their own tournament system.”

Since then, CompuSport has worked with league organisations and operators to maximise the benefits for their companies and players as the end users. CompuSport retains all crucial information on two distinct servers-one in Canada and the other in the US.

The CompuSport software is geared towards large and small operator tournaments. It features hundreds of informational elements that can detail almost unlimited combinations of play, schedule, player history and team statistics, just to name a few.

Gaudet says: ”We work with operators as partners and are always seeking their best ideas. We originally traveled the US to train charter holders, but our online help should now be sufficient to address all issues. Charter holders are more than just customers and we want to make it as affordable as possible.”

Charter holders may rent CompuSport’s tournament program software for $3 per player, capped at $750-$800. CompuSport can also provide customized score sheets and 75-100 virtual player cards so charter holders may easily complete the entry information. This process allows each team’s score keeper to manually fill out the card, which is then approved by the opposing team. Operators benefit by saving time.

Looking ahead, CompuSport hopes to complete several upgrades by 2018. These may include the ability to create individual profiles of players’ competition histories and personal averages dating back three years.

Kelleher is also formulating a plan to work with CompuSport to pioneer a program for NDA’s own charter holders. Through customised software, charter holders could then streamline their own operations via expedited sanctioning, membership roster advances and easier tournament operations. a

“It is a game-changing approach for NDA since we are already using the CompuSport software. We are getting better all the time,” says Kelleher.

FEATURE: Eyes down for a full house