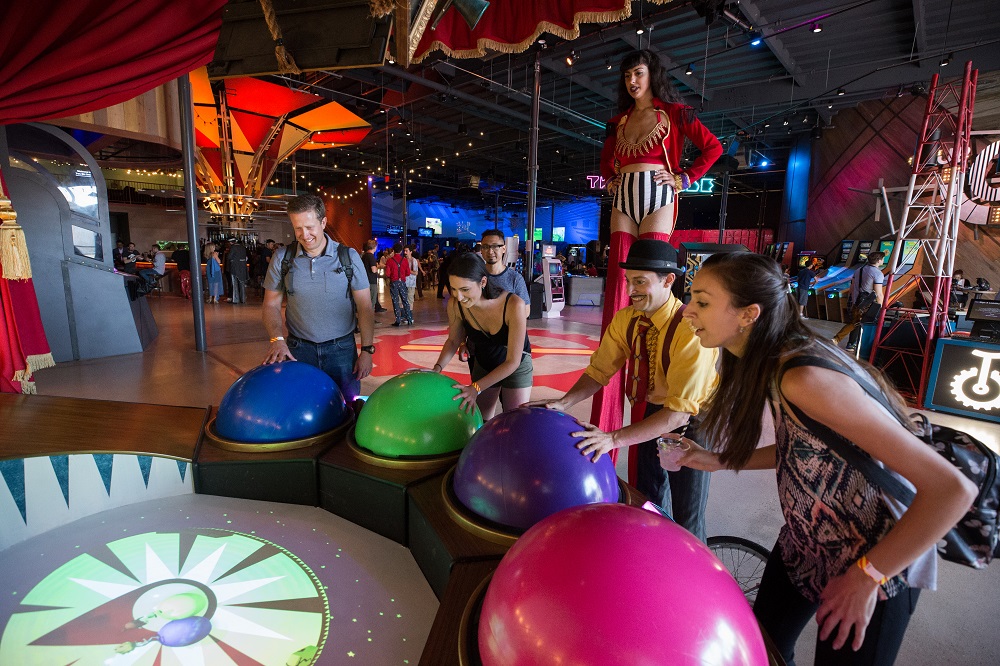 The team of entertainment and tech enthusiasts will unveil 12 new creations and games developed by friends and fellow collaborators for guests to test out and share feedback.

“We’ve hosted Beta Nights for years in our fabrication facility but this is our first time under ‘the big top’,” said Eric Gradman, CTO and Mad Inventor at Two Bit Circus. “We’re excited to share all these new experiences and see how guests respond. We’re on a quest to showcase the latest immersive entertainment and the experimentation happening in VR/AR right now is super exciting.”

All Beta Night creations are FREE to play from 6 p.m. to 10 p.m. on Feb. 26. No reservations are required, but early attendance is recommended to secure spots. Entrance to the park is always free. Bring a friend, or you can build one from spare parts in the back.

Infinity Racer has you duck and dodge to victory! Race against your friends and family in this unique retro-future VR competition game.

NovaSnake plays homage to the classic Atari snake game, except as a fully interactive AR experience. Players collect orbs in 360° space and watch their snake grow.

CVRTAIN puts players center stage in a theater for the final curtain call. It’s based on gestures, where you have to bow, blow kisses, curtsy, dab and more in a VR setting in order to get the audience to clap, cheer, yell and lose their minds with adoration.

Richie’s Plank takes players on a virtual, psychological experience 80 stories high. The game also lets you clone any real-world plank into the virtual world for 2X the immersion.

VR Jetpack Game is a free motion and natural movement VR experience, where everything is based on the position and angle of the controllers. Players shoot, travel, wield weapons and more in an all-out battle royale.

eCheese Zone is a crowd punishment party game, as you only have so many hours to win before it shuts itself off. Players must persevere through the time constraints to succeed at instruction-based mini games in the Zone.

Light Bodies, developed by artist Leif Maginnis, is an interactive light sculpture. Motion tracking sensors follow the user’s movements and project the outline on the screen with a laser.

Whimsic is an interactive mood ring made out of motion capture. A muse. A MOMENT of beauty. A mindfulness toy. It is created in collaboration between MAP Design Lab and Pilobolus Dance Company. It is set on Magic Leap.

“There is so much great technology available to creators these days; unique ways to play are popping up all over,” said Gradman. “The future of fun is bright.”

2019 off to a busy start for The Locker Network