Having already launched a promotion last month to encourage young voters along to the polls, Thorpe Park has unveiled its latest plan to get young Brits engaged in the forthcoming election – a series of terrifying, horror themed characters based on party leaders Corbyn, May and Farron,  created to add to its Ghost Train attraction – Derren Brown’s Ghost Train: Rise of The Demon.

The initiative follows a poll by the theme park which found that over half of 18 – 24-year-old Brits (55 per cent) believe that Theresa May is the most frightening candidate to be in power, and comes a week after Thorpe Park unveiled a £20 entry offer to millennials who could prove they had registered to vote.

The new attraction has seen Derren Brown’s Ghost Train; renamed as “Poll-tergeist – A terrifying ghost train ride into the political unknown”, with the party leaders chasing people for votes in the ‘infected area’ – the live action section of the ride.

Thorpe Park promises that the live action characters will mimic mannerisms of each leader and be aptly dressed in their political leader’s synonymous attire; Theresa May showcasing her leopard print heels and navy power suit, Corbyn in his herringbone brown blazer, tie-less shirt and baker boy hat, and Farron in his classic plain suit and shirt combo.

A team of eight prosthetic experts spent six weeks creating the masks, working with illustrators to design the caricatures of the three politicians. The masks are made from fibreglass and are created from intricate clay moulds based on the caricatures.

The initiative follows a study by Thorpe Park Resort of 1,000 18 – 24-year-old Brits, which found that the majority (83 per cent) of respondents stated that they would be voting in the upcoming General Election.

The effect of Brexit was still prevalent as over four in ten (45%) admitted that the recent EU vote had influenced how they would be voting in this General Election.

Over four in ten (44%) of 18-24-year-old Brits admitted to finding party policies confusing.

The study found that three-fifths (60%) of 18 – 24-year-old Brits believe that Labour has the best policies to support the younger generation, in comparison to Conservatives (11%) and Liberal Democrats (6%). Whilst over a half (53%) of respondents admitted to being scared of the prospect of Theresa May running the country, in contrast to Jeremy Corbyn (18%) and Tim Farron (13%).

In fact, results further reveal that over a half (58%) of young Brits found Theresa May to be the most untrustworthy and would be the political party leader that they would least like to bump into down a dark alley (38%).

Dominic Jones, divisional director at Thorpe Park, said: “Ahead of the forthcoming general election we’ve renamed one of our rides the ‘Poll-tergeist’ to get young Brits engaged in politics. 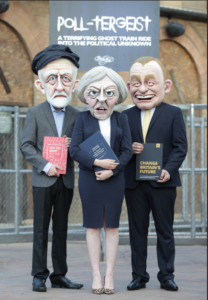 “We have remodelled our multi-award-winning attraction Derren Brown’s Ghost Train: Rise of The Demon to bring the election debate to the young generation in an engaging and immersive format. Inside our new election themed ride, you will find live actors playing the roles of political party leaders, May, Corbyn and Farron, literally chasing our guests for their votes.

“We are doing all we can to encourage debate and engagement amongst our customers around this election and early feedback has been very positive.  This follows our latest initiative where we offered anyone aged 18-24 entry to the park for a reduced rate, if they registered to vote before the May 22nd deadline.”

The upgrade of the attraction also coincides with the resort’s discounted ticket promotion last week, which offered tickets for £20 to 18-24 year olds who proved that they’d registered to vote before the May 22nd deadline.