Oakwood Theme Park in Pembrokeshire, has agreed a major new deal with Playnation to manage and operate its amusement arcade the FunZone which features everything from simulator machines and carousels to air hockey tables and ten-pin bowling lanes. 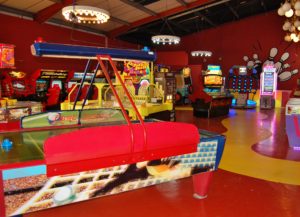 The deal is part of a new national contract which will see the Cheshire-based company look after all of Aspro UK’s arcade operations.

Oakwood Theme Park’s Phil Verbinnen said: “We are excited to be working alongside such a leading business within the leisure sector. Their expertise, combined with improved economies of scale with the other Aspro UK businesses, will enable us to develop and enhance our existing indoor amusements and provide visitors with a better, and constantly updated, experience.

Playnation owns and operates some 20,000 amusement machines across over 1,700 sites in the UK.

It partners with the market leaders in the leisure sector across holiday parks, motorway service stations, family pubs, bowling alleys, and major airports.

Among its other clients are Kiln Park in Tenby, Butlin’s, Heathrow Airport, the RSPCA and Odeon.

Set in 90 acres of spectacular Pembrokeshire countryside, Oakwood boasts more than 30 attractions and later this year is opening Dahland – a brand new zone inspired by the works of Roald Dahl. Among the new attractions will be the Flight of the Giant Peach ride, Aunt Sponge and Aunt Spiker’s House walkthrough attraction and The Magnifitorium – a New York-themed area for live shows, character appearances and performances.