The view from here… 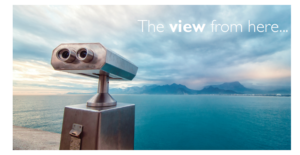 The days following the referendum saw a year’s

political action condensed into a week, with

resignations and appointments happening in quick

May, who emerged from the wreckage of the

Shakespearian power struggle that was Gove vs Johnson,

was admirably quick to take control. Producing a surprise

of her own with the selection of the flamboyant Boris

Johnson as Foreign Secretary, she resurrected a career that

had seemed dead only 24 hours earlier.

This has all left the population in various states of shock,

surprise or elation depending on how their votes had

been cast, and still coming to terms with the rapidly

changing political landscape. In another sign of a decisive

“Brexit means Brexit” (although with a subtext of

“….whatever that may mean…”). The UK had been cast

direction in the world.

new Department for Exiting the EU (DExEU). In what has

Empire, several decades of work now needs to be

unpicked in just two years. Forty staff from the Foreign

Office will form the core of this department and they are

still in the process of recruiting. At the time of writing,

DExEU was looking for a building to call home. Although

treaty initiating the UK’s departure from the EU won’t

happen before the end of 2016, the clock is ticking and

the pressure is on.

The referendum happened in a turbulent year, with

tourist bookings are down 10-15% on last year, with

overseas visitors preferring to visit places just outside of

London such as Windsor. School groups from both

overseas and the UK are understandably avoiding central

London, adding to the dip in the figures.

At the same time, the tourism industry is heavily

evidence of a holiday park almost entirely staffed with

Eastern Europeans who, having worked well there for

EU migrant workers, for whom the future is uncertain.

Outside London however, there is a more optimistic

outlook particularly in the ‘Brexit areas’. A recent Visit

England business confidence survey showed that out of

500 accommodation providers across the UK, more than

half anticipate an increase in visitors following the EU

referendum, particularly from the domestic market;

contributed to in part by the increased popularity of the

staycation and the falling pound.

With the transition of power at Number 10, here at

bacta we have been concentrating on forming new

relationships in our continued endeavours to push for the

publication of the Triennial Review of Gaming Machine

as Parliamentary Under-Secretary of State for Sport

Tourism and Heritage at the DCMS and the newly

appointed Secretary of State, Karen Bradley is, by all

accounts, ready to listen. Meetings with politicians are

currently being organised at the rapidly approaching

with – very much a case of ‘watch this space…

FISH in a Barrel

FEATURE: Eyes down for a full house

The view from here...

Are Trade Associations worth investing in?