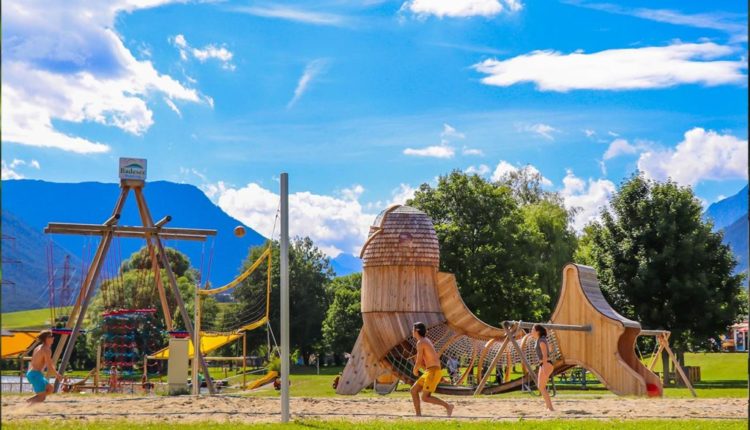 Sunkid have embarked on an ambitious project in Tyrol, Austria, to re-design the four-part bathing lake. Under a mission-goal of ‘making the Mieming bathing lake more attractive’, Sunkid managed the development of the concept in order to not only provide a fresh and reenergised day out for families with children of varying ages, but to also encourage an active interest in nature.

The re-designed area, complete with its large sunbathing range, is comprised of four sections and a toddler’s bay with a semi-circular bridge and sandpit site. Mieming also houses a fish-adventure playground where visitors will be able to see the standout carp carving towering over the water.

“[It’s the] installation that stands out most,” said Manfred Krug, manager of the bathing lake. “the carp-shaped fish with its height of 7.5 metres and length of 12 metres, even from a distance, suggests that this bathing lake offers more than is usual.” 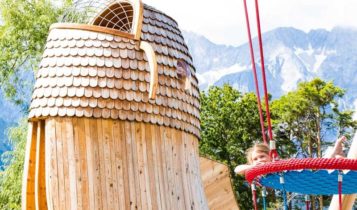 The park’s playing equipment weighs in at a staggering four tons, and Sunkid’s CEO, Emanuel Wohlfarter, explained that each nook and cranny has something to discover: “It contains climbing facilities, slides and swings – you can play hide-and-seek in it or simply go find new friends.”

Additionally, the newly installed 27m long adventure bridge not only serves as a connection to the southern bank, but also as an action area, with a jumping board, water slide, and climbing wall.

All of the new features are intuitive and kid-friendly, something that bathing lake supervisor and vice mayor Martin Kapeller reiterated. “We don’t have to explain how it works to anyone,” he commented. “our young regular guests consider the new installations at the bathing lake to be self-explanatory.”

Sunkid and its partner Almholz were responsible for all processing tasks in the project to make the Mieming bathing lake sparkle. Everything from design and planning, production, installation, authority acceptance and handover was delivered from a single source.

The park was funded with EU subsidies from the LEADER project, and took only 17 months to complete. Installations commenced in late autumn of 2017 and the official opening at Pentecost took place in May 2018.

Its location and panoramic views make the bathing lake at Mieming one of the most picturesque natural bathing lakes in Tyrol. During the lake’s 30th anniversary a number of investments were made with the financial support of the EU’s LEADER project. The TVB Innsbruck and its holiday village were added to feature a contemporary attraction for the area’s thousands of visitors, and for those who prefer a more relaxed retreat, the Kneipp station, accessed by a barefoot path, comes with its own wading and stepping pool.