Stern returns to CES in Vegas

Stern Pinball is exhibiting at this year’s Consumer Electronics Show in Las Vegas, which opens today and runs until 12th January.

Along with bringing its famed pinball machines for attendees to play, Stern will also be showcasing the Stern Pinball Arcade, the company’s latest digital offering for pinball enthusiasts and gamers. Stern Pinball will be located in South Hall 1 at booth 21406.

“CES is a great opportunity to get both our latest pinball machines like Guardians of the Galaxy and our digital pinball arcade in front of eager tech and gaming enthusiasts,” said Gary Stern, chairman and CEO of Stern Pinball. “We are excited to be showing off the best of what Stern is bringing in 2018 to the big, big world of CES.”

Attendees can play the Guardians of the Galaxy pinball machine that is based on the popular movie franchise, and is available in Pro, Premium, and Limited Edition models. The game immerses players in a dynamic, challenging, and galactic pinball environment where Star-Lord, Rocket, Gamora, Drax the Destroyer, and Groot battle Ronan to stop him from using the Infinity Stone to destroy the galaxy. All models feature distinctive hand-drawn art. 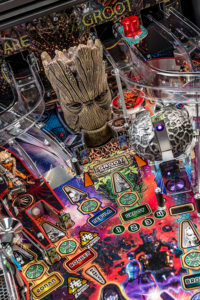 The Stern Pinball Arcade was developed in partnership with Oculus and FarSight Studios and provides gamers with a pinball experience based on digital recreations of some of the all-time greatest Stern Pinball titles. the firm will be showcasing its Ghostbusters release for the Stern Pinball Arcade across gaming platforms including: Nintendo Switch, Xbox One, PS4, iOS, Steam, Oculus Rift and more! Oculus, a subsidiary of Facebook and one of VR’s leading companies, provides unique VR experiences through its products – Rift and the Samsung Gear VR, powered by Oculus.

“This has been a fun partnership with Stern,” said Bobby King, co-founder of FarSight Studios. “We think CES attendees are going to have a great time playing Ghostbusters across the different gaming platforms. Stern’s titles and game design with our technology is proving to be a killer combination for pinball fans. You can play Stern’s titles anywhere, anytime … it does not get any better than that!” Games will be on free play for the week so don’t miss out on the action! CES participants are encouraged to stop by to check out Stern’s latest offerings, play some pinball and meet the team.