Slice of the action

Growing out of the arcade boom in the seventies and eighties, John’s Incredible Pizza Company has gradually reinvented itself as a family entertainment centre with strong links to its local communities and, of course, great pizza. Kathy Archer spoke to owner John Parlet about how he has delivered success….

Perhaps it is the famous peanut butter and pepperoni pizza.

More likely, however, the success of the John’s Incredible Pizza Company has stemmed from the simple philosophy of founder, John Parlet, that it’s important to “be in the right place at the right time.”

John Parlet’s first store, which established the eventual foundation for over a dozen John’s Incredible Pizza family entertainment centres, might not have happened had Parlet not decided to put an Atari Pong game in the hallway of his Ridgecrest, California pizzeria.  It was 1972, and everybody in Ridgecrest (a town in the middle of nowhere, out in California’s Mojave desert), loved the idea of eating pizza and playing those first-generation video games. Pong eventually lost out to Donkey Kong and Space Invaders, which were later replaced with the subsequent evolution of video games; but the concept is still going strong.

Over the course of 20 very busy years, John’s Incredible Pizza recently opened its twelfth store in Newark (Northern California); has expanded into Beaverton, Oregon and Las Vegas, Nevada; and has two more stores slated to open in California in 2018.

Twenty years ago, he decided to launch his second pizza restaurant and family entertainment centre in Victorville, California.  In this second store, Parlet included many more games and attractions – providing a nice variety of family entertainment that is generally not available in a family TV room. Since then, over the course of 20 very busy years, John’s Incredible Pizza recently opened its twelfth store in Newark (Northern California); has expanded into Beaverton, Oregon and Las Vegas, Nevada; and has two more stores slated to open in California in 2018.

Parlet says he wanted to provide “good food with a good attitude,” and that’s just what he and his people do.  Their company motto is “all you can eat food and fun,” and he strives to hire spontaneous, outgoing, friendly people to staff his operations.  Starting up in the family entertainment business did not come without its challenges. Parlet says he was undercapitalised and inexperienced, but with a lot of drive and commitment, he made it work.

The newer John’s Incredible Pizza stores are much larger than the first store, now averaging over 60,000 square feet in size (which is about the size of a an American football field).  Each of the FECs averages about 100 different games, amusement rides and attractions, and activities.  Parlet says that the most popular attraction at his stores, after the fabulous pizza and pasta buffet, would be the bumper cars, which are widely enjoyed by people of all ages.  He also includes redemption games, rides, video games, and family attractions.  Customers say that his stores “are a great place for the kids, and not bad for the parents, either.” 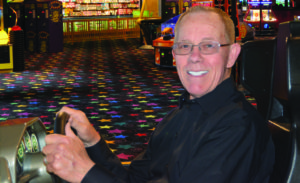 According to Parlet, his pizza really is “incredible”.  He honed his pizza-making skills at a small pizzeria in the Midwest US and, with their blessing, took all that he had learned to his first store in Ridgecrest.  Now, the pizza and pasta buffets at John’s Incredible Pizza all offer more than 20 different pizzas with red sauce, white sauce, (peanut butter!), and all different kinds of toppings, along with a pasta bar, a salad bar, drinks, frozen yogurt, and ices.

Not only have the John’s Incredible Pizza stores grown in size and number, but the annual attendance has also certainly increased since the pizzeria days in Ridgecrest.  Many of the stores average over 50,000 to 60,000 guests per year, with the FEC chain entertaining a total of five to six million guests per year.  John credits much of the success of his business to the many good employees who are and have been loyal to the company for many years.

One of the most incredible things about John Parlet is his commitment to giving back to the local community in each location where his company operates. He says that he always partners with a local organisation or non-profit that is well represented in the community, especially youth organisations.

What is planned next for this incredible FEC chain?  Parlet commented: “As long as we’re having fun, doing good, and having good success, we’ll keep doing this.”

Next year, John’s Incredible Pizza will open new stores in Westminster and Carson, California, and there will probably be two new stores opening every year for the foreseeable future.

Parlet said: “There always have been and always will be challenges in business.  Right now, one of our biggest challenges is increasing costs, particularly labor; but we believe that if you meet those challenges, you will be successful.”