The table ranks Britain’s top 100 small and medium-sized (SME) companies with the fastest growing international sales over two years and Simworx, which specialises in the design and manufacture of media-based dynamic simulation attractions, has hit the 2016 league table at number 49. The listing is compiled by Fast Track and published in The Sunday Times each May. It is sponsored by Heathrow Airport and supported by the government’s Exporting is GREAT campaign.

“We are naturally delighted and extremely proud to be included in this year’s Sunday Times Heathrow SME Export Track 100 listing and to be within the top 50 is a real bonus,” said Simworx Managing Director Terry Monkton. “We are continually developing and growing our product range and are really excited about some of the new developments we are working on at the moment. Additionally, with last year’s acquisition of RoboCoaster we added significantly to what we are able to offer clients in the different sectors we serve. 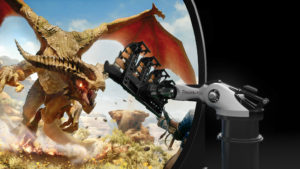 “The theme park and visitor attractions industry is a truly global market and through our efforts at trade shows, personal onsite visits and advertising we have been able to secure sales across every continent. Currently, for example, the company is installing seven of its attractions within new parks being developed in Dubai and in recent times has installed an Immersive Tunnel ride in Malaysia based on a dinosaur island which has been recreated in 360° 3D, a 4D special effects cinema at the International Antarctic Centre in New Zealand and a 4D dynamic simulation ride based around the Marvel Avengers intellectual property at the world’s largest indoor theme park in Indonesia. Our products can also be found at venues across mainland Europe and in the US.”

The Simworx product range incorporates a variety of media based attractions including 3D/4D special effects theatres, the StarGazer motion theatre, the Immersive Tunnel, the Cobra motion platform ride and dark ride, Advanced Guidance Vehicle (AGV) dark rides, static and track based RoboCoaster attractions and most recently the 360° Flying Theatre. New products are developed on a regular basis while on the creative side, the Simworx team is continually developing new Virtual Reality (VR) and augmentation experiences.

Neymar and the Bieb battle on LAI’s Speed of Light