Sega has revealed its newest adventure game Transformers Shadows Rising at the Amusement Expo International held at Las Vegas last week. The title is the follow-up to Sega’s Transformers Human Alliance, and features locations from all over the world.

“We are very proud to be working with Hasbro on Transformers Shadows Rising. The blockbuster Transformers films have been a hit with fans around the globe, making this iconic brand a worldwide phenomenon.” said Paul Williams, Sega CEO. “With the new BUMBLEBEE movie debuting this holiday season, we think Amusements Expo International was the ideal time to launch Transformers Shadows Rising so operators can have the game in time for the film release.”

The new release features a cabinet based on the truck-form of the leader of the Autobots, Optimus Prime, four levels displayed on a 55” monitor, and fixed controllers. Players can use the new ‘Hyperenergy Tech’ lever to combat multiple enemies or defend from attack. 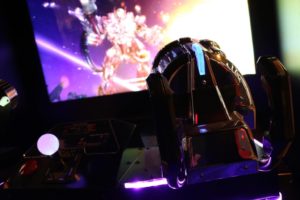 Transformers Shadows Rising will be shipping in May, whilst all other games are available now.

Renovations and revamps for Acadiana Lanes