Are parks and customers on top of current safety methods?

Keeping customers safe at parks is paramount to operators and regular checks and balances must be part of standard procedure. So are operators and customers getting better at park safety? US veteran, Sharon Harris, talked to some experts and crunched some stats…

Over 100 years, generations of children and adults have screamed in delight on thrilling amusement park rides and attractions. Whether riding a spinning Ferris wheel in the sky, or feeling the rush as a roller coaster speeds through a complex series of twists and turns, today’s rides offer unprecedented exhilaration.

Sadly, that adrenaline rush may also occasionally include serious rider injury or accidental death. Due to several high-profile incidents over the years, industry officials have developed programs to ensure greater customer protections that minimise public concerns.

The non-profit International Association of Amusement Parks and Attractions (IAAPA), now celebrating a century of operation, began as a parks advocate in 1918. In 100 years, IAAPA has grown into the world’s largest trade association for permanently located attractions.

According to the NSC, injury totals decreased 17 per cent from 2015 to 2016. The decrease from 2003 is significantly higher, reaching 36 per cent. Of all total reported injuries, 8.5 per cent were classified as “serious” enough to require hospitalisation of more than 24 hours for medical treatment beyond observation. The remaining 91.5 per cent were considered less invasive.

However, serious injuries in 2016 grew by 54 per cent from the 2015 proportional rate. Some experts question why, especially since many high-tech thrill rides have already operated for years.

Many operators and their attorneys contend that customers themselves cause 80 per cent-90 per cent of all accidents. They claim that riders too often ignore instructions and posted warnings.

Many operators and their attorneys contend that customers themselves cause 80 per cent-90 per cent of all accidents. They claim that riders too often ignore instructions and posted warnings.

“All amusement rides are 100 per cent safe without operator or customer error,” asserts Michael Wood, CEO of Wood Entertainment in San Antonio, Texas.

Wood, an independent concessionaire operator who grew up in a carnival family, understands the complexity of the amusement park ride industry. He solely owns and operates seven rides at state fairs from Florida to Hawaii. Wood and his partner Frank Zaitshik co-own his eighth ride, which is one of only two 150′ transportable Ferris wheels in the US It is built with 36 simple and one complex computer system.

Wood states that computers have changed what modern rides can do, requiring him to hire a higher calibre staff to operate and maintain them. This advanced technology necessitates intense training for his 50 employees

He says: “Today’s amusement ride industry is one of America’s last entrepreneurial enterprises out there. We take a vacant building or field and transform it into something fun for a mass audience. Because of our high overhead, we typically used local employees when we came to an area. That is no longer possible because today’s technology demands a guarantee of adequate training.

The public expects rides that reach the edge of excitement. Their intricate system technologies alert us to needed repairs and even our evacuation procedures are more complicated as the systems become more complex.”

Marketing and excitement are important, but safety remains the number one priority. Wood has served on the Board of Directors for the National Association of Amusement Ride Safety Officials (NAARSO) for years. NAARSO primarily oversees jurisdictional state or county regulations.

As an active member, Wood describes a commitment to superior education and training. NAARSO conducts on-the-road regional continuing education programs to prepare operators with the skill needed to comply with accreditation requirements. Whether via in-person sessions, video DVDs or online training for any operator with a mobile device or computer, those wishing to retain their accreditation must complete 32 hours of continuing education within 24 months.

“We are just scratching the surface for those people who must be reached. NAARSO aims for amusement ride safety information to be available to anyone who wants it,” Wood says.

The introduction of Rider Responsibility Laws also outlines customer safety obligations. These laws define customer behaviour guidelines to ensure a safe experience. A well-trained staff member can usually identify problems and mitigate potential litigation because of a rider’s own carelessness or refusal to adhere to rules.

Michigan was the first US state to enact any laws in 1966. Ohio followed and is one of the early states to launch Rider Responsibility Laws and ride inspection regulations. `

Wood claims that private/public partnerships make for the ideal alliances since both sides can educate one another about specific issues. He says: “Those with the best programs have advisory boards with regular park and carnival people.”

However, accidents and tragedies do occur, often resulting in lawsuits that require competent legal representation. Wayne Pierce, known as the “Adventure Lawyer” in Annapolis, Maryland, labels it insufficient to only perform the basics.

“This is no longer just an amusement industry that was built around the industrial age of years ago,” he explains. “Since the 1990s, it has focused more on the experience. There is a unique relationship between the operator and manufacturer since many US manufacturers have disappeared. Equipment now comes from either Europe or China, which has grabbed the business with lower prices. Those American companies who remain have survived a changing business.”

From his career roots in Maryland, Pierce became a global amusement parks insurance defence specialist in the mid-1990s, saying he “rode the wave to become an expert.” Pierce also considers himself more of a “cause lawyer.” Over his professional life, Pierce has tried 50 cases and now acts as a liaison between the operators and insurance companies.

He places almost all blame on the customers, citing numerous statistics, including a 25 per cent injury rate resulting from dangerous cell phone use while on a ride.

Pierce urges operators to proactively protect themselves. For example, Pierce recommends that trampoline centres should place ceiling surveillance cameras and sound capabilities as a method to “chase off” would-be litigants. He also urges requiring parents to accompany children to avoid potential legal exposure.

He places almost all blame on the customers, citing numerous statistics, including a 25 per cent injury rate resulting from dangerous cell phone use while on a ride.

He applauds the Uniform Rider Safety Act, which has been either entirely, or in part, adopted in 22 states. It contains language that defines rider misconduct and incident-reporting procedures. It also spells out restrictions and rules like age, size and instructions for latch bars.

Not all rides or amusement parks are created equal with respect to potential harm. Pierce explains that passive rides are those where riders are buckled in, therefore decreasing possible incidents. 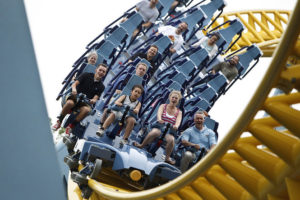 At the other end of the ride spectrum are those with greater individual customer participation and physical activity, increasing the risk. These include water parks, go karts and trampolines.

Pierce also cites anecdotal information that suggests lower accident rates at smaller parks or attractions. While there are no absolute statistics, he says that many industry professionals consider this factual.

Among legislators, some rides and attractions generate more interest, if at all, than others. Pierce claims that trampoline parks operators have tried to be more proactive to help craft appropriate legislation, but lawmakers have not viewed them as a priority.

However, Pierce also emphasises that continuous safety and proficiency improvements are crucial and can make all the difference. Self-training schools and trade shows are great sites to learn the necessary tools to operate cautiously while ensuring little or no liability.

As rides become even more technologically advanced to accommodate thrill seekers, the public and all industry members should demand a cooperative effort to ensure a safe, fun experience for everyone.