Reflex Gaming will unveil a new concept in digital Category C gaming, with a compendium designed to move through retailer rent bands, in exactly the same way as a reel-based game. 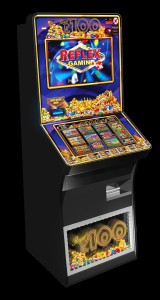 Royal £100 is a ten-game digital compendium housed in Reflex’s Video Atom cabinet, that will be available to rent on a two-year contract, during which time it will be supplied with fresh proven content from Reflex, including hi-tech and slot style games.

Royal £100 will be provided to operators for the rental term, allowing them to move the machines to new locations, or update existing ones on site. Once the two years is through, operators simply return the machines back to Reflex. New compendium titles are also being developed, allowing operators to follow Royal £100 with other digital machines from Reflex, giving the cascade effect through Pubco estates.

“We have examined the existing methods for introducing digital to the Category C retail sector and so far we feel they have, in the main, failed,” says Quentin Stott, Managing Director of Reflex Gaming. “The problem is that the investment for many operators is too onerous and then the machines are supposed to stay on the same piece of carpet for years and years to be updated with new games.

“We believe that by treating video Cat C in the same way as analogue and moving the machines through operators’ estates, we can get past the barriers of acceptance to the concept. In effect, rather than trying to change the market in order to increase video Cat C penetration, we are adapting our strategy to fit the current commercials. Critically, there will be no major investment necessary, operators can just take it on rental. In addition, we have something that most other suppliers don’t – a suite of retailer-approved games, including Hot Shots, Fiddle A Fortune, Best of British and Galloping Jackpots to spearhead the product, backed by successful poker and slot-based games,” adds Quentin.

Reflex Gaming will unveil Royal £100 at next week’s ACOS show at Chelsea Football Ground on stand 50.