Hugely successful New Zealand-based indoor climbing centre brand Clip ’n Climb now has more than 100 centres around the world, including 16 in the UK. Co-founder, John Targett, talked to GAP to tell us exactly how he got to the top….

So, John, how did this all come about?

“Clip ‘n Climb is an idea that emerged in 2004 out of a collaboration between myself and a Kiwi called Tim Wethey who was a designer and builder of traditional artificial climbing walls. I had emigrated to New Zealand with my family from Ireland where I had sold my business. I was looking for a new business opportunity in Christchurch. Tim was keen to build, own and operate an indoor climbing centre in the city but was not confident that it would be particularly profitable due to the prevailing Mediterranean style weather and the large number of natural crags for climbing within 15 minutes’ drive.

“I had spent three years in the amusement industry in the early 1980s selling Bumper Boats for Eurounion who were based in the south west of England. During that period I travelled extensively throughout Europe and took part in many amusement trade shows. This knowledge of the industry, and my penchant to ‘think outside the box’ got me wondering how we could make climbing more accessible and attractive to non-climbers. Climbing is a wonderful activity that is healthy and challenging but one that is perceived as full of risk by those outside the sport.

Around that time, ‘sit-on-top’ kayaks had emerged on the market and quickly became very popular. The secret to their success was that they eliminated the perceived risks of capsizing and getting trapped in a (conventional) kayak. This was achieved by removing the superstructure and using a triple hull configuration. The latter made sit-on-top kayaks incredibly stable on the water. Two changes that that were to provide game changer in terms of the popularity of paddling.

During this time Tim and I visited a lot of indoor climbing centres to benchmark them and to see what we could learn. My observation was that they were not designed for younger people with short attention spans. Additionally the vast majority of routes were ‘set’ by adults for adults. Physically and technically the younger climbers could not reach many of the holds on a route. Routes in conventional climbing gyms are identified by the use of a set of single coloured holds eg the red route, the green route etc. However when the youngsters climbed they needed to grab holds of any colour to get to the top. This meant that every route felt much the same and boredom quickly set in.”

So, in effect, you gamified it?

“My thinking began to focus on the need for variety in the climbing challenges and an environment where people did not feel intimidated by experienced climbers. Overall I was trying to figure out how to ‘dumb down’ climbing while at the same time making it safe and exciting activity, one that was hugely attractive to kids but one which also attracted adults who just wanted to ‘give it a go’. Golf suddenly came to mind, a serious sport at the top level but also available in shortened versions like Pitch and Putt, and in fun versions like crazy golf and adventure golf. The objective was the same  … get the ball in the hole in as few strokes as possible but it was working on so many different levels. This was a bit of a Eureka moment and I began to visualise a climbing centre full of uniquely different climbing challenges.”

Where did you take it next?

“I created about 15 initial wacky ideas to share with Tim and others in the local climbing community and got a hugely positive response. They say timing is everything in terms of new products and new ideas. Too soon and no one is ready or the technology doesn’t exist, too late and someone else may have struck first. We were very fortunate that in the USA someone had come up with a great idea to eliminate the risk that a Belayer ( the person who controls the safety rope for a climber ) could makes a fatal mistake. Their game changing solution was to have an Automatic Belay system.  This device was to prove crucial to the creation of Clip ‘n Climb and the business model it made possible.”

Having got to the ideas stage, when did it start to become a reality?

“We made the decision to proceed and within 18 months we had purchased a building, built a conventional climbing gym in one half and Clip ‘n Climb in the other. We opened the doors and Clip ‘n Climb was an immediate success. We sensed it was scalable and contracted a team of design engineers to take our prototype climbs and turn them into a modular kit-set format that would enable the equipment to manufactured, delivered and installed economically and efficiently. We very quickly made two sales in New Zealand and then our first export sale in Canada.”

And how many centres are there now? 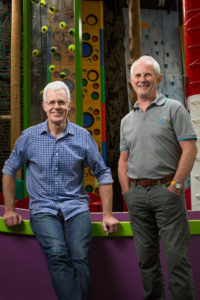 “Today the company is enjoying exponential growth and we celebrated the opening of the 100th centre in December 2016 in Amsterdam, but in reality we were already well on our way to 130 either open or under contract. To cope with demand we have production facilities in New Zealand, England and China and another will open in the USA by the end of the next financial year.

“Clip ‘n Climb ‘created’ the Fun Climbing sector and is the clear international market leader. The key to the brand’s success has been a firm commitment to quality and innovation, with new Challenges being added to the range each year. And while we pride ourselves on the quality of our products, it is the owners and their staff that bring it to life. We estimate that over 5 million people each year visit Clip ‘n Climb centres and enjoy an exceptional customer experience. This is recognition that our comprehensive staff training programme is working well. Networking between the various centre owners is very strong and there were over 70 owners at the last European Owners Meeting in Manchester. Clip ‘n Climb is a licensed business model whereby owners can pick and choose the kind of support they require. It comes with an exclusive territory and all the benefits of a successful brand.”

Is ‘Fun Climbing’ a fad or has it got legs?

“Well, indoor climbing has been around since the early nineties and the market is still growing. I believe the popularity of climbing is due to an innate urge to climb … we crawl, we walk…. we climb. Clip ‘n Climb may just seem like fun but like the sport of climbing it provides physical and mental exercise, and it can help develop self-confidence and people’s willingness to accept challenge. Life is not without risk and Clip ‘n Climb enables people to take perceived risks in a safe and supportive environment. As a business model Clip ‘n Climb differs from conventional climbing centres, where climbers pay an entry fee and can stay as long as they want that day. Clip ‘n Climb operates on the basis of a timed session, usually one hour, meaning the same equipment can earn multiple fees during a day.”

Would you change anything about the way you did it now?

“Looking back and considering things in hindsight I don’t think we would do things very differently. We staged the growth of the company to ensure that we had the capacity and capability to cope with the extra business. We launched a state of the art Auto Belay to replace the American device which had high operating costs. In a joint venture with Christchurch-based Holmes Solutions the market leading TruBlue Auto Belay was born. However, rather than take on another business venture we sold our 50% stake and used the funds to accelerate the global rollout of Clip ‘n Climb. The product is now manufactured in Boulder, Colarado by HeadRush Tech who have developed several other outstanding products based on the same eddy current braking technology.

“Funded initially by two guys working long hours with very large mortgages the company became self-funding after about four years. Manufacturing licenses granted to Entre-Prises Climbing Walls added hugely to production capacity and value through having a partner with deep market knowledge and a factory close to the huge European market. When Tim exited the business 18 months ago to follow other pursuits his shareholding was acquired by Entre-Prises, a move which confirmed their confidence in this growing market sector and the emergence of Clip ‘n Climb as a genuine global brand.”

“Very shortly the company will launch an innovative new device to replace the standard karabiner on the end of an Auto Belay line. It has been co-developed with Design Energy in New Zealand and the company is confident BelayMate will prove to be another game changer in terms of safety and risk management in climbing. Overall the company is confidently forecasting further strong growth during the year ahead with new strategies being introduced in the USA and Asia in response to market demands.”