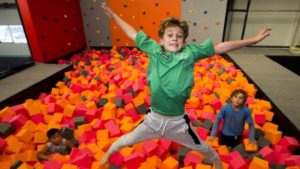 Taonui Street’s new Cloud 9 Trampoline Park is set to open at the end of the month – a facility inspired by owner Nicholas Azevedo’s old job delivering motor homes for hire and getting a peek at what similar parks were doing.

Cloud 9 will be the largest trampoline park outside of Auckland, including a gladiatorial arena, foam pit, rolling log, and ninja assault course. Flip City, another trampoline park in Palmerston North, is also undergoing changes.

“There’s always room in Palmerston North for more stuff for all the kids looking for something to do.” said Azevedo.