JNC is launching an improved version of its Rescue Firefighter skill game.

The Rescue Firefighter pop up hammer version was developed following the success of the Galaxy Garrison whacker from Feiloli.

The new and improved Rescue Firefighter has the same small footprint as its predecessor but comes equipped with several modifications and heightened gameplay. The backdrop of the whacker features a fireman climbing up a ladder, so the faster the child hits the pop up fire targets, the faster the fireman climbs the ladder and the more tickets/points the child wins.  Once the fireman climbs to the top of the ladder the user is greeted by a flashing siren at the top of the machine. This game also boasts a multiplayer function which allows two units to be linked together, so children can play against each other at the same time and see which fireman can reach the top of the ladder the quickest.

Results show that having a linked Rescue Firefighter more than doubles earnings than that of a single whacker machine. 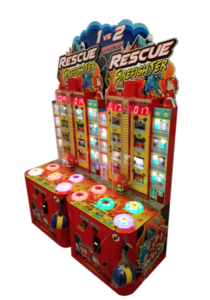 The game will be on stand 28 at the Irish Gaming Show in Dublin on 7th-8th March.