JNC has a new crane machine available –  the latest in its Crazy Toy series – which it recently showcased at EAG in London.

The easy to use joystick on the front of the crane means that players now have more control over the movement of the crane as they attempt to pick up the prizes, which are highly visible due to the deliberately transparent front and side panels, along with a prize area uniquely positioned at the back of the cabinet to further promote the prizes available for customers on show.

“The colourful yet calming blue LED illuminated panels of the Crazy Toy 3 cranes were a hit at the EAG show in London and early figures prove that this machine will be one of the most desired cranes on the market this year. The Crazy Toy 3’s brilliant cabinet design is supported by pleasing gameplay and a Paokai processing unit, resulting in a crane that not only generates great revenue, but a crane perfect for all sites for years to come,” said Sam Coleman, sales executive at JNC Sales 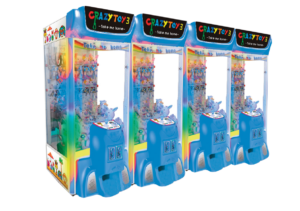 A single player version of the machine is available for £2,495.