The franchise is owned by developer Cuestamoras Urbanismo, which will be in charge of the central administration of the premises. Mexico-based KidZania currently operates in 19 countries worldwide.

“In the specific case of KidZania, which is a business within Oxygen of which Cuestamoras Urbanismo became a franchisee and the operator, it is because nowadays this type of space are the ones that create the most value. We project visitor numbers of more than 300,000 people per year, according to the studies we have done and a target segment very aligned with our project, which has to do with families, because it attracts not only the children but also the parents and children. grandparents, a great variety,”  said Javier del Campo, KidZania commercial director. 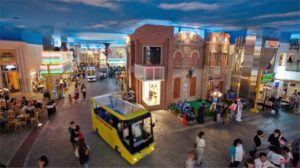 When paying to get into Kidzania, each child will receive a fixed amount of game money (called Kidzos) and will be able to earn more by role playing as firemen, police, paramedics, doctors and so on. They will receive basic training for the role and receive the corresponding payment. There will also be branded jobs in the private sector too.

“From the corporate point of view, it has a lot of value because to achieve this hyperreality, it is necessary for the city to have a real appearance and that helps brands the most. They are not tenants but we call them industry partners: they are the owners of the category in each industry, it is a way of interacting with their product, their brand, which creates an impression and a lifetime memory, “ explained del Campo.

Cuestamoras Urbanismo held pre-feasibility meetings with brands from different sectors that might be interested in having a presence within KidZania. It will have 34 spaces for brands that will offer around 70 roles for visitors.

The participating brands will invest between $40,000 and $150,000 at the beginning, in the theming of their space and the exclusivity of the category.

Additionally, they must provide a similar annual amount, as maintenance fee, and reinvest every three years, to maintain the quality of the spaces. Negotiations with banking, ice cream, beverages and food brands are already advanced, with contracts that go from three to five years. They will also receive offers from brands interested in having a space within the mini-city.