QubicaAMF Worldwide has entered into a distribution agreement with American Bowling Service (ABS) in Japan which will serve as QubicaAMF’s exclusive, full line distribution partner in Japan for capital equipment, automatic scoring, parts, supplies and pins.

ABS is the largest distributor and manufacturer of bowling supplies in the Far East, celebrating its 50th Anniversary in 2014. The company was established in 1964, as a distributor of bowling balls in Japan and currently has headquarters in Ota-ku, Tokyo. In 2003, the ABS Logistics R&D Center was established in Ichikawa-City, Chiba. ABS sponsored the 37th ABS Japan Open Bowling Tournament in Inazawa, Aichi in 2013, which was the 10th Consecutive Crown Sponsorship. 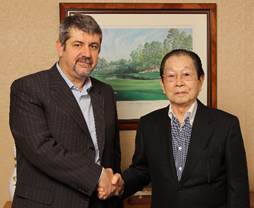 “As the world’s leading marketer and manufacturer of bowling and mini bowling products, we wanted a local partner whose main focus and primary business is bowling; and like QubicaAMF, whose success is linked to the bowling industry,” said Emanuele Govoni, President and CEO of QubicaAMF. “ABS has a long history in bowling, a well-respected reputation, and strength and longevity as a company. We are looking forward to this partnership and to further develop and grow the bowling market in Japan.”

“We are excited about the opportunity to add full line of QubicaAMF equipment to our offering,” added Mr. Watanabe, CEO of ABS. “QubicaAMF is the leader in the bowling industry. We are eager to represent the industry’s best and broadest product line in our market, including some of their most innovative products such as the BES X Bowler Entertainment System, XLi EDGE Pinspotter, Harmony Furniture, the new CenterPunch Deck Lighting and the highest quality pins in the industry. We see this as a great fit for our operation.”

Daifuku Plusmore (Daifuku) and QubicaAMF mutually decided to end their distribution agreement. Daifuku’s primary business is in machine automation, and this is where they see the company focusing in the future.

“We would like to thank Daifuku for their long association with our company,” continued Emanuele Govoni. “They have served the market and our Japanese customers very well. We are very appreciative of all they have done for our customers for almost ten years and we wish them continued success.”

The majority of Daifuku’s employees associated with bowling have transferred to ABS.