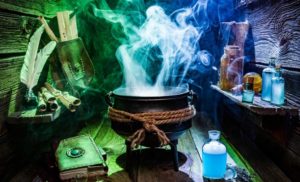 Edinburgh based comedy club, Monkey Barrel Comedy, has cut the ribbon on a new Harry Potter inspired escape room. Players, or, er, budding sorcerers, are let loose in the Department of Mysteries, home to some of the wizarding world’s most potent prophecies, and have 50 minutes to complete a series of magical tasks, cast spells, and battle with dark forces (as well as rack up points on the leaderboard) before the Dark Lord arrives.

2-5 wily warlocks can enter the Department for a 50 minute game, and there’s also a traditional tavern on site, serving themed food and drink, as well as a lost property room and Potter walking tours.

Edinburgh is home to JK Rowling herself, and where Harry Potter was originally dreamt up and written, and The Department of Mysteries is fittingly located in the city’s cobbled old town on Blair Street.

“This is more than just an escape room,” said director John Millar. “This is a truly immersive experience, we want people to believe in this magical world of witchcraft and wizardry as they cast their spells and brew their potions.”