After successful openings in both Liverpool and Dubai in 2016, Mattel will debut a new interactive, indoor family entertainment centre in Sevenum in the Netherlands this autumn.

Mattel Play! Sevenum is the first branded attraction of its kind in the Netherlands and Benelux, and will be a 2,000 sq m facility inside the new Family Entertainment Centre Sevenum located on the site of De Schatberg.

Fully themed zones in Mattel Play! Sevenum will feature favourite TV characters and their worlds, including Thomas & Friends, Bob the Builder, Fireman Sam, and Angelina Ballerina. In addition, children will be able to build their own creations in the Mega Construx and Mega Bloks zones and enjoy the Mattel Play! Roller Disco.

Scheduled to open in autumn 2017, Lappset Creative has designed and planned the entire Mattel Play! Sevenum, and will be responsible for the supply and installation. Sevenum is the second family entertainment centre for Mattel Play! supplied by Lappset Creative, a division of the Lapland-based Lappset Group Ltd. Mattel Play! Liverpool in the UK was the first.

According to Johan Granholm, director of Lappset Creative, the Sevenum attraction is the largest project Lappset Group has ever delivered: “The multimillion Euro project is already well under way. Lappset Creative designs, manufactures and installs the attraction. The design phase has already been completed, and manufacturing will begin now with full installation scheduled for the late autumn this year.” 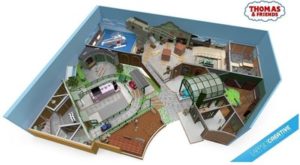 The multi-activity entertainment centre will also contain a freestyle action park for youth including trampolines, a foam pit and pump track as well as a skating ramp area.