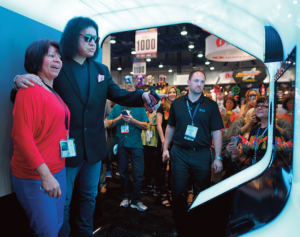 Not only are Simmons and his band emblazoned on the booth’s exterior graphics in all their glory; the photo booth also gives customers a chance to digitally merge their photo with the group members in various themed borders.

“KISS is an obvious choice for a super-popular licensed property,” said Apple CEO Allen Weisberg. “The group has earned in excess of 30 gold albums to date, more than any other U.S. rock band in history. They were founded decades ago but they are still going strong…and the KISS phenomenon will power Face Place to new heights!”

“Operator response to our KISS Face Place Photo Booth was as over-the-top as the band itself,” said Apple COO Scott Avery. “Many operators are fans of Gene Simmons and KISS, and they know their customers from ages 15 to 50 also get a big kick out of this group. Operators agreed that getting to take your photo with The Demon and the other members of KISS in character is definitely going to drive a lot of sales. We wrote a lot of orders in Vegas!”

KISS concerts feature performers in outrageous harlequin-style makeup and costumes, plus onstage antics that include fire-breathing, smoking guitars, levitating drums and large-scale pyrotechnics. As singer Simmons explained, “KISS is a Fourth of July fireworks show with a backbeat.”

Jukeboxes to benefit The Ministry of Sound

Bring on the Wall