King of the swingers

What's behind the sudden expansion of Ropes Courses?

US high-ropes specialist Ropes Courses, has been busy of late tying up a manufacturing deal with New Zealand’s Clip ’n Climb climbing walls and acquiring Amaze’n Mazes too. It all adds up to rapid expansion for the firm, as market development manager, Lori Gunthorp tells Ronnie Dungan…

You could be forgiven for thinking that Ropes Courses is all about one thing, given its does-what-it-says-on-the-tin moniker, but that would be somewhat wide of the truth.

At least, you might have been accurate a month or two ago, but recent activity has seen the firm enter into a manufacturing agreement with new Zealand’s Clip ’n Climb to take it into the climbing wall market and also the acquisition of US firm Amaze’n Mazes. On the surface it betrays a penchant for companies with awkward apostrophes in their name, but there’s obviously much more at play here than that. Rapid expansion for one.

Starting with the Clip ’n Climb deal, Ropes Courses market development manager, Lori Gunthorp explains how it all came about.

She says: “John Targett, owner of Clip ‘n Climb and Ropes Courses, Inc owner, Jim Liggett, have known each other for years. Both companies offer products that cater to families and there is an overwhelming advantage for facilities to operate both attractions with minimal overhead cost. 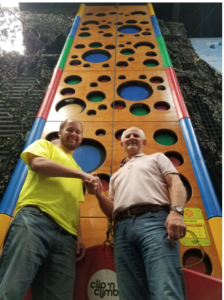 t would be in both parties’ interest for us to introduce the climbing challenges to our customer base and expand from there.”

It’s an ambitious move by the firm and, despite the similarity of the offering, does create a need for the firm to expand in terms of staff, output, marketing, sales, all areas in fact.

“We’ll be expanding our manufacturing facility and hiring additional staff in the new year with the expectations to increase the opportunity for sales to our existing and future client base,” explains Gunthorp.

“We are in the process of integrating Clip ‘n Climb in our current facility in Allegan, Michigan. We will serve as the sole North American manufacturer once we’re up and running. We expect to have this all ready by January, 2018. We will still take orders and work with Clip ‘n Climb headquarters in New Zealand to fulfil those orders until then.

“We will distribute Clip ‘n Climb to anyone in North and South America. We can also distribute to customers in Spain Germany and Australia with written approval from relevant distributors in those areas and any other country.

It’s a huge international expansion for the firm although it will not be selling Clip’n Climb in the UK, Ireland, France, Belgium, Netherlands, Luxembourg and of course, the firm’s native New Zealand.

Risk is minimised (though not eliminated) somewhat by the bespoke nature of the product, although the firm will hold some of the key compo

“To start, each order will be unique. We may be able to stock climbing wall panels in the future and then customise a customer’s order based on their specifications.”

There will still be involvement from Clip ’n Climb, particularly in the initial stages, with production still running through New Zealand until Ropes Courses has its manufacturing plans properly in place.

“We have a great working relationship with John Targett and his New Zealand team. We will use their knowledge and expertise to guide us as we start the process of manufacturing in Michigan. Until everything is officially up and running, current orders will be filled through the New Zealand plant.”

What won’t change is the branding. The firm will still be using the Clip ’n Climb brand. The only thing changing is the manufacturing. And Ropes Courses will continue to be sold alongside it. Indeed, by offering both brands, it will be able to provide the right solution whatever the type/size of attraction or its individual requirements. 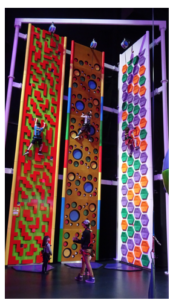 “We’ve discovered a lot of our customers are trying to evolve their facilities with more and more fun attractions that keep their guests on site longer. By diversifying our family of products, we’re able to fill that need for our current customers and future clients.

Clip ‘n Climb is fairly new in the US, with just under two dozen sites in all of North America while RCI has over 160. So there is still huge potential for the brand from down under.

“We feel that a lot of our customers will be very interested in this new product offering from us and we’re excited to share the possibilities,” says Gunthorp, “but because RCI is all ready a market leader we are able to bring this new product to the market with the traction we all ready have.”

Whatever way it decides to slice the cake, the firm sees huge potential in the climbing walls market in the US, which offers would-be climbers a risk-free chance to try their hand before they move onto more ambitious climbs indoors and out.

“It’s much different from traditional climbing walls at adventure facilities and climbing gyms,” believes Gunthorp, “because those are really meant for the experienced climber or someone looking to dedicate a lot of time into a new hobby.

“Clip ‘n Climb challenges, similar to our Sky Trail ropes courses, offer an experience to individuals that are new to the adventure world. Kids as young as two to four can experience a Sky Tykes ropes course. Same goes for Clip ‘n Climb climbing challenges. We bring new types of attractions to the family entertainment market that are perfect for birthday parties, team building groups, and those that may have never been able to participate in the traditional world of climbing. “ 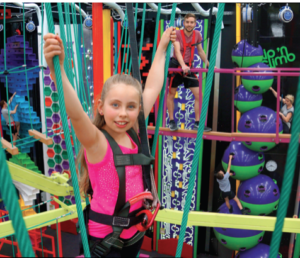 With products already selling into more than 25 countries, Ropes Courses is no strange to the export market and it believes that Clip ’n Climb has huge potential not only in the US but also South America too.

“South America is a huge untapped market for both Sky Trail ropes courses and Clip ‘n Climb challenges. We now have a dedicated sales representative based out of Puerto Rico. He has a wealth of knowledge of the culture and values of the region as a native to the area and having been working in the entertainment business for many years. He works with companies in the water park, amusement park, shopping center, resort and tourism markets as they consider their options to drive family entertainment.”

In addition to its deal with Clip N’ Climb, the firm has also acquired Colorado-based Amaze’n Mazes for an undisclosed sum.

It will continue to use the name Amaze’n Mazes, and founder Greg Gallavan will continue as a consultant to RCI to provide operational guidance on design, construction, and themes.

Amaze’n Mazes was launched in 1988 by Gallavan in Winter Park, Colorado as an indoor family fun center with a small maze, video arcade, burger bar, and mini golf course. Since that time, more than 70 Amaze’n Mazes have been designed and installed in 24 US states and nine international locations from Hungary to South Korea and Australia to Mexico. Over the decades, innovations have included aqua mazes and custom-designed elements to blend with the natural setting including ski resorts, state parks, and fairgrounds. 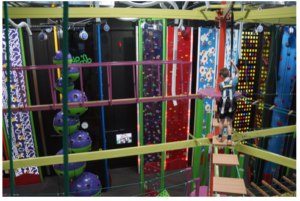 “The staff at Ropes Courses, Inc. has known and worked with Greg for a number of years,” explains Jon Weston, vice president of sales and marketing for RCI. “This acquisition allows us to tap into Greg’s expertise in maze design as well as his network of contacts and venues around the US and the world,” he adds.

With two significant and rapid-fire deals under its belt, the likelihood is that Ropes Courses will be busy enough integrating the two new brands into its line-up to make any other big moves in the foreseeable future. But with its gaze fixed firmly upwards, you never know what else might turn up next.