The 16th edition of IAPPI’s Amusement Expo took place from 3 – 5 March in Mumbai, India. The event was supported by Ministry of Tourism, the Government of India, and Chhattisgarh as partner 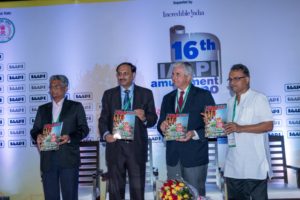 state – promoting its capital city of Naya Raipur as an amusement and entertainment hub.

After the opening performance, IAAPI’s president, Mr. Ajay Sarin and guest of honour Mr. Darrell Metzger, past chairman, took to the stage to address delegates.  Mr Metzger said that he was amazed to see the growth of the growth of the Indian Amusement industry in such a short space of time. This was evidenced by the number of international companies at the Show, he said, all keen to break into the Indian market and SAARC countries.

Mr Metzger started his career at Disneyland in California and for the last two decades he has served in a number of high profile roles in the amusement and leisure industry in Asia and the Middle East. Speeches were  followed by the unveiling of the Exhibitor Directory, thriller magazine and the traditional lamp lighting.

The exhibition attracted over 3000 visitors, including owners, directors, CEOs, senior managers from Amusement and Theme parks, Water Parks and Family Entertainment Centres (FEC’s). Also there in force were real estate and mall developers, resort and hotel chains, architects and government officials from the tourism department.

The exhibition was spread across 8000 sq. metres and boasted 107 exhibitors from 21 countries, showcasing everything from  FEC games, to skill and adventure games, all-terrain vehicles, architectural and design services, admission systems, 3D animation, electronics and much more besides.

Roel Kwaspen from Fab Luxembourg said: “The 16th IAAPI Expo was well organised and we have received visitors from all over India at our booth. IAAPI does an outstanding job in leading the Indian amusement industry. We are looking forward to be a part of the expo in 2017.

John Davies, Commercial Director – Interlink LG, UK added: “I have to say that I was extremely impressed with the quality and quantity of visitors .We received a large number of enquiries .It is most encouraging to see how the Indian market is expanding and we look forward to continued business success across the country.”

IAPP’s National Award for Excellence, designed to acknowledge, facilitate and encourage innovation was held alongside the expo. The winner was Ramoji Rao, founder of the Ramoji Film City in Hyderabad.