Injustice Arcade set to be a holiday treat 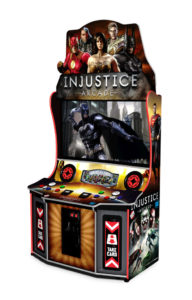 Mike Childs, Arcade Manager at Unity Farm, commented, “At first, we thought it was a bit of a slow burner, but by the second week on site, it was on fire!”

“The concept of collecting a set of cards works particularly well on a holiday park where there is a lot of repeat business,” says Geoff Spencer, regional sales manager. “The cashbox figures on Injustice at Brean were incredible for just a couple of weeks on site. We can really recommend this title for other holiday parks looking to feel some heat this summer!”

Each play of Injustice Arcade vends one of 200 collectible cards starring one of the DC Comic Universe characters with famous Heroes including the likes of Batman, Superman, Wonder Woman and Aquaman as well as some of the most sinister villains, including The Joker, Harley Quinn and Bane which can then be used to be played in the game. Players can build a unique team of three in any combination or put characters together that have compatible abilities to unleash a super attack.