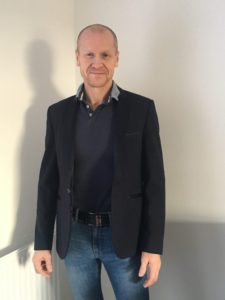 Martin Austin – a popular character within the amusements industry – has returned to the fold at the 2019 EAG Show on the Harry Levy stand.

Martin, who has worked for several high-profile industry companies including Reflex Gaming, took a brief break to work in property. However, he soon realised that he missed the amusement and gaming industry.

“The grass was not greener, that’s for sure,” he said. “I soon realised that this industry was in my soul and was lucky enough to join Harry Levy at the end of 2018.”

Martin’s job is a field sales role, like his predecessor at Harry Levy, Micky Kennedy, who decided to retire last year. “Micky has left a large void and I am doing my best to fill that by taking over his accounts and developing new business,” says Martin. “I will be actively engaging in conversations with customers about new equipment and new ideas.”