By RDungan Last updated May 5, 2017 851
Gröna Lund in Stockholm has opened the Ikaros, the world’s second Sky Jump, which stands 95 meters tall and tilts riders more than 90 degrees before plummeting to the ground at 90 kph.
“I have pretty much experienced all that there is in an amusement park. So I can honestly say that this is one of the most terrifying drop towers in the world, but also one of the most exhilarating. The feeling of adrenalin pumping through your system as you fall t 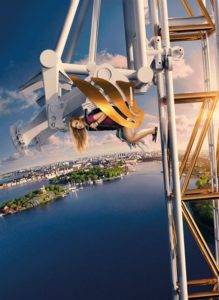 owards the ground, is hard to beat. I would really recommend everyone who has the courage, to try Ikaros,” said Johan Tidstrand, owner of Parks and Resorts Scandinavia.

A part from having the most roller coasters per square meter in the world, Gröna Lund is also the home to one of the tallest StarFlyers in the world (Eclipse) and the tallest Free Fall Tilt in Europe. Is the 31st ride at the 134 year old waterfront park in the middle of Stockholm.
Ikaros specs
Total height: 95 meters
Maximum speed: 90 km/h
Fall angle: more than 90 degrees
G-force: 3,5
Height requirement: 140 centimetres
Capacity per ride: 430 guests per hours
Seating: two gondolas with eight seats each
Ride type: Sky Jump
Manufacturer: Intamin
Investment: SEK 75 million