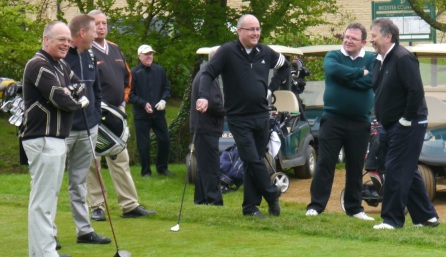 The Games Cup was started in 1994 as an annual golf competition between manufacturers and operators in the amusement and gaming industry. Previously referred to as the industry’s ‘best kept secret’, this year’s tournament was more popular than ever. The teams celebrated the Cup’s 20th Anniversary and raised over £2,000 for Jamie Procter’s Foundation.

Each year, golfers attend a different venue to play a tournament based on rules of the Ryder Cup. This year, 28 golfers played on Sunday 27th and Monday 28th April at Bicester Hotel Golf & Spa Club at Chesterton near Bicester. After two days of intense competition, the operators won the event by 16 points to 12.

Julian Bond, who is one of the founder members of the Games Cup and who set up Jamie Procter’s Foundation in 2011 said, “The name GAMES originally stood for Gaming Amusement Machines Exclusive Society. From its modest beginnings, I am delighted that the event is still flourishing and that a large number of the original players are playing this year. I was absolutely delighted that our charity, formed to keep my eldest stepson’s memory alive, was adopted in 2012 by the players.”

Ian Chuter, Captain of the operators’ team, said “This is a great event, which I seem to have been involved with for most of my working life. This year, having we won again, I am proud to hold the cup and celebrate raising money for Jamie Procter’s Foundation. Julian Bond is a personal friend and I am delighted to support the charity in memory of Jamie.”

Captain of the manufacturers’ team, Keith Healey said, “I retired from Games Warehouse a couple of years ago but have been involved with the Games Cup since it started. It is always enjoyable to get together with a group of friends sharing mutual respect. It is also great to raise money for such a worthy cause!”

Aidan Towey from Innovative Technology, sponsor of the manufacturers’ team said, “This is my fourth year supporting the event. It’s a great start to the golf season and it has been nice to catch up with everyone after EAG earlier in the year. We are delighted to sponsor the event to make sure it continues to grow in the future.”

Sponsor of the operators team, Mike Clokie from E-Service said, “Every year, more companies are becoming involved with the Games Cup. For instance, this year Steph Norbury from Coin-op Community sponsored pre-dinner drinks. As well as being a tremendous social occasion, there is a serious purpose to the Games Cup and we aim for the event to grow and continue to raise funds for such a worthwhile cause.”

The money raised for Jamie Procter’s Foundation supports deserving children from less privileged backgrounds by funding expeditions and adventure courses, which can often be life-changing for the participants. By the end of this year, Jamie Procter’s Foundation will have supported over 400 nine to eleven year-olds, running courses in Brixham, Devon, including raft building, sailing and other outside sports.

For more information about the Games Cup, contact Mike Clokie at E-Service on 0844 669 2679 or email mike.clokie@e-service.co.uk