As part of its multimillion dollar expansion project, the venue has doubled in size and now offers more than 10 interactive attractions and event spaces that cater to a wide range of corporate activities and special occasions. Previously 90,000 sq ft, ity is expanding to over 210,000 sq ft.

“The continued growth plan of Xtreme has been a thrilling ride,” said Aaron Parkinson, co-owner of Xtreme Action Park. “The addition of these unique attractions and the expansion of our food and beverage program has made us the largest indoor family entertainment venue in Florida. Our goal is to offer something totally out-of-the-box and exciting to every person who walks through the door.”

Since its launch in 2015, it has boasted the world’s longest and fastest indoor asphalt race rack.  The course features European gas powered karts that can reach speeds of 45mph, on a half-mile poured asphalt track. 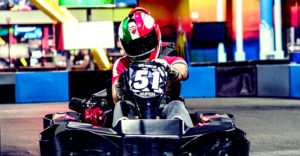 With the goal of becoming the largest indoor entertainment centre in the country, Xtreme Action Park is expanding in several phases. Phase One of the plan, which totaled 90,000 square feet, was completed in July 2015 with the renovation of the go kart track and the introduction of the Sky High Indoor Ropes Course, ten recreational bowling lanes, The Arcade and The Pit Bar, a sports bar featuring DirectTV sports packages and the UFC Fight Nights.

The completion of Phase Two includes the introduction of attractions including:

The firm is already beginning plans for Phase Three of its expansion. When completed, the facility will house more than 230,000 sq ft of attractions including over 36,000 sq ft of event spaces.