Following the continued success of its five existing venues, DP Leisure (DPL), plans to open a sixth UK site in 2017, this time in Farnborough town centre in Hampshire.

The newest 20,000sq. ft. 360 Play unit will be located in Farnborough at the Meads Shopping Centre and will join sites in Milton Keynes, Stevenage, Leicester, Basildon and most recently Redditch

The development is owned by St. Modwen and the complex is home to a Sainsbury’s food store, The Gym, coffee shop chain Starbucks and other retailers. The wider town centre regeneration includes a new Vue cinema, casual dining restaurants and a Premier Inn.

The opening is scheduled for late 2017 and once again the design and master planning of the project will be carried out by DP Associates (DPA), the sister company to DP Leisure, which will project manage the build.

The design and content will follow the company’s formula of a wide range of activities for all young children, from toddlers up to the age of 12, and  also designed so that adults can join in too, it will be a true family day out offering.

Among the key attractions will be a three-storey play structure, family bumper cars and a carousel.   The rides are being supplied by specialist Italian manufacturer IE Park/SOLI Bumper cars which has supplied the same attractions to all the previously opened centres.

Additionally, the 360 Street creative play zone, a key feature at all 360 Play sites, will once again be made up of individual play units such as a fire station, supermarket, pizza parlour, vets, car garage/body shop and dressing up shop.  It will also incorporate some new elements yet to be announced, along with a party zone offering a dedicated area for children’s parties. 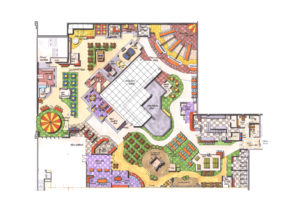 IE Park/SOLI Bumper Cars managing director, Andrea Munari commented: “We congratulate 360 Play for once again choosing IE Park’s products for their sixth project in Farnborough. Both products for this latest project are custom designed – a special mix of junior and mid-size Sport 1 themed dodgem cars and a carousel themed as the ‘Circus Roundabout’ – and will integrate perfectly with the concept and the family entertainment centre business model that has already proved so successful at 360 Play’s five other sites. As always, we wish Duncan Phillips and the entire 360 Play team all the best with this latest venture and thank them for once again choosing IE Park as the supplier for these key attractions.”

Also new will be an area where ‘the outside comes inside’ as there is no option at the site for a dedicated outdoor area, as found at some of the other 360 Play sites across the UK.

“We are delighted to announce plans for our sixth 360 Play site which continues the roll out of the brand around the UK,” said founder and managing director,Duncan Phillips. “The town centre location is, like our recently opened Redditch site, a move away from our more familiar type of site on leisure parks but we are confident it will be another successful venture. Key location drivers in choosing the site have been the great communications links the area has with the M3 corridor from the M25 out to Basingstoke, which bode well for our normal visitor catchment area of up to a 45 minute drive away. We are confident our offering will complement what is currently available to those coming to the town centre and will become a key element for visiting families with young children.