The Hills are alive

Pleasurewood Hills has had a turbulent time and many different owners in its 34-year history. Now owned by the French Looping Group and with a new manager in place, it is embracing new indoor attractions in a bid to become a less seasonal business.…

Norfolk’s Pleasurewood Hills has had its share of ups and downs since it first opened in 1983. Several owners later and the park is still going strong, with new management in place and looking to respond to market changes to continue to keep the park relevant for a contemporary audience.

The park is continuing its redevelopment and will shortly be replacing its sizeable restaurant with an indoor play area.

Adam Noble, who became general manager of the park near Lowestoft in Norfolk in January of this year, is also introducing a family Christmas show to attract visitors in the winter.

During his first few months as manager,  Noble has added a brand new indoor UV dark ride with laser shooting called Rootin Tootin Target Trail, instigated some much-needed refurbishment and listened to customer feedback about the future direction of the park.

“The biggest impact I’ve been able to have so far is to look at a tonne of customer feedback and act upon it,” added Noble. “Price is always going to be the biggest challenge that we face, so we’ve introduced a non-rider ticket as a reaction to what customers were saying.”

Noble says the British weather had a lot to do with his decision to start introducing indoor attractions to Pleasurewood.

“We have very little to do indoors and this adds a really great space for children to play and parents to sit and relax should there be a summer shower. It also gives us an attraction during times that we would normally be closed such as February half term and over Christmas.

The success of family entertainment centres up and down the UK influenced his thinking. That and his own experience in the area.

“I have also installed these centres in family pub/restaurants in the past too,” he explains.

“Look at the successful incorporation into Zoos and other attractions.

“I think the real challenge is to add value in a way that exceeds expectations. For example, this year we had ‘pop up’ street performers throughout the park. So instead of saying there is a show here, at this time etc we were able to add value with an element of surprise and without any expectations. It was a real success for us.”

For Pleasurewood the appeal of indoor play is that it can create business all year round and become a less seasonal affair. But the indoor play provision has to become a destination in itself. Not easy.

“I am developing the indoor play area and the castle theatre in order to give us more opportunity throughout the year. Whilst we will always be a seasonal business, that shouldn’t stop us being ambitious. This park really needed someone to think outside of the box and really maximise our amazing assets.

“We are absolutely a family theme park and so we offer a full day out of fun. We have something for everyone and our shows are every bit as popular as our rides. Of course we can’t compete with the likes of Alton Towers but at 60 per cent cheaper we offer superb value for money.”

Pleasurewood has had a turbulent time of it since it arrived in 1983, but Noble is optimistic that the team he has in place can bring success to the park again as long as it learns to adapt and embrace new challenges.

“I immediately fell in love with the park,” he says, “and there were some amazing people within the team. The culture of the team fundamentally had to change and focus had to be brought back on to the customer. There was a ‘we’ve always done it this way’ culture and that had to go. My first priority was to build a fresh, fun, creative and engaged team through the development of the existing members and the addition of some new people.”

The five year plan is to working on continue rejuvenating it and adding more to improve the mix of attractions.

“The park will continue to develop over the next five years and to become more aesthetically pleasing as well as continuing to invest in new, exciting and fresh attractions which will add value to the family experience.

“I think a driving school would be a fantastic addition. Where children can earn their ‘driving license’ through a simply driving a car round a themed track. I like the idea of extended opening –  a ‘summer nights’ approach. We currently can only open until 6pm. And I think there is huge potential in the corporate market for team building and party nights, also.”

In fact, Noble is not ruling out anything and is clearly prepared to invest an experiment to bring back success to the park and improve its image.

“No new feature is guaranteed to succeed of course.  As with all businesses budgets have to be correctly set and managed. That’s where the importance of the manager to create the right plan and deliver against it.”

The park was initially created by founder and entrepreneur Joe Larter in 1982 as a small family attraction, containing a miniature railway, Cine 180 curved-screen cinema and the Fort Fun adventure playground.

After the railway came the Station Square, and later Main Street and then the addition of new attractions.  Bumper Boats were launched for children along with a plastic ice skating rink and animals, including highland cattle, were used to attract families to the site in the park’s early days. In 1982 a steam railway was opened. 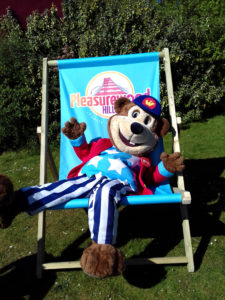 The park grew until it was sold to RKF, a property development company, in the late 1980s, but it eventually encountered financial problems, going bankrupt.

However, in 1990, the park’s management team staged a buy-out and introduced new attractions, including the Log Flume and Cannonball Express rollercoaster.

This management team also signed a deal that brought Noel Edmonds to the park in 1995. The Haunted Theatre was converted into Crinkley Bottom Castle and he visited the park along with his show’s star, Mr Blobby.

The park continued in this vein until 1996-97, when it was purchased by Queensborough Holdings PLC and managed by Leisure Great Britain, a caravan park operator. It owned the park until 2000, when Peter and Peggy Hadden, who had been connected with the park for many years, bought it.

The popular spinning mouse rollercoaster ride which was added at the end of the 2000 plus others including the Fireball, Megaspin Rollover and Mega Drop.

In 2004, what is now Compagnie des Alpes purchased the site and the new owners pledged to spend £3m on a host of improvements.

In January 2011, it was announced the park had been sold to a new company: HIG Capital France.

Now it is run by the French Looping Group, along with a dozen other parks, and it continues to invest in the park.