GAP looks at recent developments in the world of simulators, where VR is making a major splash and interactivity is everything. Jon Bruford reports…

Simulators come in many shapes and forms, but essentially it’s a machine designed to give the user a realistic imitation of something, and is often based around transport – so, for example, flight simulators, motorcycles, high-end cars.

But the potential for a simulator to enhance your leisure venue is huge, as people embrace virtual reality headsets, and interactivity becomes ubiquitous.

MaxFlight’s Frank McClintic explains how his products can give customers a different experience every day, and that’s just with the base set-up: “Many places, if you get a movie ride and everyone has done that, you have to pay a lot of money for another movie ride; in our case, just what our unit comes with has, for example, two different flight programs. In one you can fly different aircraft in a WWII scenario. We use WWII because today’s dogfighting is not much fun, because you’re moving too fast. Dogfighting in WWII in a much slower aircraft with greater interactivity, it’s a very different experience, and every time it’s different. You can change the number of opponents, you can network terminals together in your venue – but that’s just one aspect. In the other software you can fly any plane from any airport in the world, so a player can change that every time they play, they can fly over their house if they want to.”

McClintic says that simulators can give venues a year-round draw that they might not already have, especially in places where weather is a factor.

He tells us: “We have been shifting focus too in that we are looking at theme parks now, where we might put 50 to 100 units in a given site. If you look at theme parks in general they are in a weather zone where their season might be only 120 to 180 days a year; we provide, for generally half the price of a rollercoaster or other attraction, and half the land footprint, content that is pretty much unlimited. You can go onto our systems for ten years and never do the same thing twice now. If you put our simulators into a theme park, someone could do a thousand different rollercoaster rides, or make their own and ride that. Additionally, when you look at the throughput economics, our throughput is the same or greater than a $15million rollercoaster per hour but half the price, and with re-themable content, meaning instead of producing whole new rollercoaster every year, or if a new movie comes out, they just get us to provide new content for the following season. 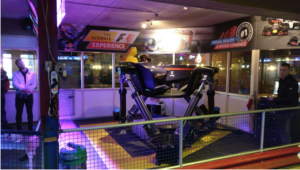 “The interactivity today is key; people aren’t always looking to go watch a movie. With interactive rides you create your own experience every time you go in; you might do something different every time.”

Of course, a flight simulator might not be everyone’s cup of tea – though the networked dogfight experience sounds fantastic – but there are many other products out there.

Triotech’s VP of marketing, Christian Martin, explains that adding some interactivity can really help bring the punters in. He told GAP: “It’s all about interactive media-based attractions. Some of our attractions are not interactive but are immersive, but most are interactive. We just opened Ghostbusters at Heide Park in Germany, and recently opened our fifth Ninjago The Ride at a Legoland in Germany. Interactive is really our bread and butter.”

The Ghostbusters ride is 5D, so one has to ask what the Ds actually do; Martin explains: “As a company  we have kind of dropped the ‘d’s; the media is in 3D, then 4D means a simulator with special effects like motion, wind, light. What happened a few years ago is well, if that’s 4D then mine is 5D because I added some special effects. Someone else then says well, mine is 6D; it goes up to 13D and stops making sense. For our position, we decided one day when we sold a 7D interactive simulator and our client called us in some alarm because someone had opened a 13D ride down the road, that we would drop the ‘d’s. Your movie is in 3D, 4D is accepted industry-wide, it makes sense. But in the case of Ghostbusters, that was the park’s decision. The park is going to name an attraction the way they can market it best.”

Of course, Ghostbusters is a major licensed property and intellectual property is a growth sector in simulators, says Martin – alongside interactivity.

“There are two or three things we have seen. Intellectual property, licensed product, is hot,” explains Martin. “It’s a balance for the operator, the park, because they have to pay for the IP without selling a single ticket. On the other hand, their marketing is that much easier because you don’t have to explain to consumers what the story of the ride is. If it’s Ghostbusters, people know it already, it has huge brand recognition and it’s a lot easier to get people to try the attraction. If you were creating your own story – for example, we did Voyage to the Iron Reef for Knott’s Berry Farm in California. The story is completely invented by the creative people, so there is no license fee but on the other hand in marketing, you have to explain it to customers to get them there. It’s a choice the park has to make and we have seen in the last couple of years a lot more IP used to bring in customers.

“There is also a push from the license holders – it used to be, let’s do a t-shirt, a hat, some toys, but now it’s let’s add a ride, or even a –land to leverage their asset, they know they can do more now.

“The other significant trend, and it’s been going on for a few years, is interactivity. It’s nice to be immersed, and you see fantastic new technology to place a guest into the middle of incredible environments, but they remain passive experiences and if you can have a truly interactive experience where you are actually participating, it brings the guest into the story. It’s not only more fun, we strongly believe that interactivity increases re-playability so people, because they acted and interacted and influenced proceedings, want to do it again or do it better or differently.” 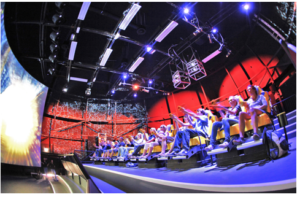 Licenses are not just from the world of entertainment though – given the transport nature of many simulators, vehicle marques are also key.

Reinder Holtkamp, general manager, CESYS tells GAP how it can work with vehicle manufacturers, and about its installation at Ferrari World. He says: “We do some custom work, for example marque-branded, but mostly we sell what we have in our product range. We can work together with automotive manufacturers, it is a lot easier if we do that; it means we don’t have to go out and buy a Lamborghini to create a simulation!

“We have various kart centres in the United States, and we are in Ferrari World in Abu Dhabi, to name a few.

“Ferrari World was big for us, we have 11 simulators there; we have 18 simulators in I-Way, in Lyon.”

There is another trend of interest in simulators, and that’s virtual reality, or VR. Triotech’s  Martin elaborates: “The big thing everyone is looking at is VR, Virtual Reality. It’s going to be in our lives, there is no doubt; the players in it are so huge that they are going to develop something useful. The question for our industry is what is its place in a theme park or family entertainment centre? Everyone thought it would be rollercoasters, it creates a different experience but it creates one that affects your throughput on the attraction. It creates an attraction and experience that has cost issues, and other issues. These things have to be figured out for our industry for VR to take its place on stage. Otherwise it will have a place, but a more specialised, low-capacity, high value-added one.”

Frank McClintic concurs. He says: “The big shift worldwide is – the same way that wide ties, then small ties come and go – virtual reality. We have actually have VR product since 1994, and it’s the hot thing worldwide again with the advent of new technologies and the head-mounted displays. We have incorporated them into our devices and it opens up a whole new world of virtual reality when you marry unlimited motion, so you can look around and feel like you are actually there, to motion rides. It seems to be picking up steam globally right now, so we are in the middle of that.

“I’ve been in the business for close to 23 years; in addition to our motion simulator business, we now help customers design and theme their entertainment centres now. We are involved in a few big projects at the moment, actually. I don’t have to focus so much on the core business now because it takes care of itself, so when a customer calls I can talk to them about their product mix, demographics, location, I can recommend other manufacturers’ products, and much more.

“We have two fairly large virtual reality-based centres we are in the process of designing and finalising right now, that’s going to be a big thing going forward.”

McClintic is bullish about his own products, and he has the track record in simulators to prove their worth; he concludes: “For someone to lose money on a MaxFlight product they would have to put it in a dark closet with a lock on the door.”