The joint venture between UNIS and software developer Virtuix sees them vying to become one of the first effective providers of a workable VR arcade product with the Omni Arena. Ronnie Dungan chatted to UNIS boss Steven Tan about making the technology work in the attractions space….

The race to establish virtual reality as a commercially viable arcade attraction has seen UNIS create a new division in partnership with developer Virtuix to distribute the Omni Arena VR experience.

The partnership has led to UNIS creating a new brand called Fun VR Tech which provides both the hardware to make simulated experiences possible and the software to enact a wide variety of those experiences.

Omni Arena features a series of omnidirectional treadmills, which allow users to explore a programmed world from a single location. The treadmills sync with the simulation software, adjusting the user’s position based on where they are within the reality that they are simulating. Which means that can interact with the virtual world just as they would with the external one.

It can accommodate between two and five users at a time, making it ideally positioned for family entertainment centres.

Unis boss, Steven Tan feels the technology will eventually become integral to future arcade experiences, being incorporated and added to games and attractions rather than replacing them.

He says: “We think that VR will bring fresh ideas to the market rather than superseding everything that’s already there. We might see more of the regular genres incorporate VR elements in the future. Right now the medium of VR is exciting so it does make it feel like this is the sole direction for the future of the industry, however the past and the future are more likely to merge in a slew of new products.”

The deal with Virtuix is a straightforward partnership between software and hardware. 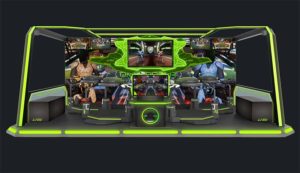 “Their technology is simply the most advanced, safe, and suitable for the amusement market. There is a ton of VR innovation out there, however not many companies think about the sort of hurdles that a commercial space brings with it. We evaluated what Virtuix had in mind and realised that they’ve covered all their bases on that front. Their treadmills make sure the guests are safe and enjoy themselves while the operators are happy with a unit that doesn’t need constant service because of all the moving parts.”

The VR experience is not without its problems of course, as anyone who has experienced motion sickness from using it will testify. And then there are issues of hygiene over shared-use of headsets and safety concerns over people become disoriented or falling on the moving equipment.

“There are of course all the usual challenges associated with VR. We have tackled most of them. We’ve even created a list of “VR Mythbusters” that debunk a lot of the usual worries that people have when it comes to VR.”

The list addresses four issues  – motion sickness (because you are moving on a treadmill you won’t get sick); hygiene (there are washable/wipe clean covers for headsets); difficult set-up (the whole unit is manufactured so is easy to install) and safety (the player is strapped into a harness so can’t fall over).

As with any fledgling technology there are a number of different approaches to it, but Tan feels content is king and must be central to any VR offering.

“Sustaining interest is a major focus for us, but it’s done differently with VR in comparison with other amusement products. Majority of VR hardware needs to be seen as a box that will be able to deliver the best software to your centre’s guests. To keep VR exciting we have a content strategy in place, i.e. we have about 5-7 games that will most likely be out and compatible with our system by the end of the year. Many of these will be multiplayer capable as well.”

Pricing levels are also a consideration, but Tan believes the VR experience will allow arcade owners to charge more than they would for their existing arcade machines. Indeed, the cost of set-up might well dictate that they have to, although he argues that investment levels are not an issue.

“You can definitely charge more based on the wow factor of VR and the uniqueness of the experience. Additionally, right now anyone who wants to have a home VR setup has to pay minimum $700 for all the hardware, and this doesn’t even include the price of the games themselves. While trying VR in an entertainment centre or at the mall might seem more expensive then playing a regular amusement game, it is still massively cheaper than getting your own hardware and paying for each piece of software you want to play.

“The cost of setup and space are not higher than on a regular featured attraction. The distinction between a game and an attraction is nothing new to the industry. With VR we’re simply adding a new type of product to the attraction category.”

Early adoption of new technology can be a risk, however. Ask anyone who ever bought a C5 or a betamax video recorder. But Tan believes the arcade experience will lead the direction of VR entertainment technology in homes while offering the sort of experience that will be beyond even the most high-end home system.”

“The pace of technology is something no one can really catch up with,” he says. “It is simply impossible, as many things are built for forced obsolescence these days. However, commercial products are generally ahead of what the consumers can get for their homes, and that allows operators to stay ahead of the progress just a bit. The exclusive software we’re offering also adds another benefit to the whole package.”

Success in the VR arcade market may not necessarily come to those who get in first, but rather to those that come up with the most effective and appealing option for owners and players alike. But in offering such a complete solution Unis may well have performed the neat trick of doing both.

Whatever happens next, things are about to get very real.