Laser Maze creator, Funovation is celebrating ten years in the business this year, Ronnie Dungan caught up with the firm’s chief operating officer for a brief history lesson, a look to the future and some party planning….

Once the sort of technology you would only see thwarting criminal masterminds in bank or museum heist movies, Funovation has turned the laser maze into a popular family attraction and is now celebrating ten successful years in the market.

The Laser Maze Challenge – Funovation’s first product – was the brainchild of Ted Ziemkowski and a friend, who actually built one in Ted’s basement.  The original idea was born out of incorporating a laser maze into haunted houses but it quickly became apparent that the attraction had the potential to appeal to a much wider audience. Ziemkowsk eventually partnered with John Bonvallet, Jason Heddings, and Erick Mueller, and Funovation was born.

While the Laser Maze is Funovation’s first product, the vision was always to develop multiple attractions.

“In creating and enhancing attractions, we continue to follow one of our early goals: to create heart-pounding, addictive attractions that require brain and brawn,” says Katie Fuller, chief operating officer of Funovation.

According to Fuller, the firm’s big breakthrough was not something obvious to its consumers but a crucial piece of back-end technology.

“About a year into to manufacturing and selling the Laser Maze Challenge, the engineers developed Funovation’s TriNet cabling system.  While not something that a player would ever have knowledge of, this technology was a big breakthrough in the backend functionality of the Laser Maze and continues to serve as the backbone of Funovation’s products.

“In the Funovation spirit of continuous improvement through innovation, the engineers didn’t stop there.  In January 2016, they released TriNet 2 which allows us to remotely update and upgrade customers’ firmware.  This means customers will always have access to the latest features and functionality of Funovation’s products without having to replace any hardware.”

The firm can make the weighty claim to being the first in and indeed, the creator, of the laser maze market.

“There was not a market for it specifically,” says Fuller. “That said, FECs are always looking to differentiate themselves from their competition and have the latest and greatest attraction for their customers so there was certainly a market for a new product. 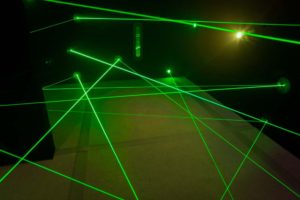 “Two key attributes of the Laser Maze Challenge are that it has a small footprint and that it’s a great booster attraction.  Early customers loved that they only needed 200 to 400 sq. ft. for this new attraction and found that players would take a run through the Laser Maze while waiting for other attractions to become available.  These two factors continue to make the Laser Maze popular with operators today.

“If you were to visit one of the first Laser Maze Challenges installed and compare it to our latest model, there have been vast improvements but the common theme is still there – act like a ninja and get through the laser beams as quickly as possible. Early Laser Mazes continue to see a lot of success for their operators and this is a testament to the durability of the product.”

But as a pioneer in the market , you have to move pretty fast to stay ahead of incoming competition. Product development is vital in keeping the firm moving forward. Nothing kills off a technology-lead company quicker than old technology.

“Funovation’s engineers are constantly ‘playing in the sandbox’ to develop new features or enhance existing ones.  This helps us keep our product current with ever-changing trends in technology and have our finger on the pulse of what the marketplace wants or needs.  Additionally, Funovation has a proven track record for products that are reliable and long-lasting.  This reliability has helped us develop a loyal customer base who continue to recommend us to new customers.”

The firm has expanded very quickly during its first 10 years. It currently has more than 300 locations in 29 countries and shows no signs of slowing up.

“Funovation would not be nearly as successful as it is without a strong team,” says Fuller.  “One of our core tenets is respect for our employees and this is very apparent in the loyalty employees have shown to the company.  Most of our team members have been with us for over five years and this continuity in staff has played a key role in our success.” 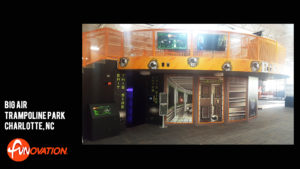 Reaching such a landmark anniversary creates a tendency for nostalgia, but the firm is not resting on its laurels and is looking for new ways to expand and new installation points for Laser Maze. The opening of many different types of entertainment centre provide an opportunity.

“In 2017 we formed a partnership with Fun Spot Trampolines to develop and install Lasers Mazes on trampolines.  We have installed a few of these systems already with several more in the works.  The Laser Maze Challenge continues to see great success in the North American marketplace and we are also expanding into other parts of the world, particularly in China where we are installing several systems in the coming months.

“Additionally, we are in the final stages of the development of our second attraction.  Details are being kept under wraps until its launch but we are very excited to bring this new attraction to market.”

As well as new technology development and new product areas, the firm is enjoying expansion into overseas markets,  with Asia a particular fruitful territory.

“The North American market remains our strongest market but Asia seems to be where we are expanding the most rapidly.  We have several Mazes in Japan and are gaining a foothold in China through several partnerships that we have recently developed.”

The Laser Maze has changed in ways large and small over the last ten years.  Some of the changes have been on the back end to make the system an overall better product for operators. Some have come on the front end; most notably the addition of a second game play – Beam Buster – and a video capture feature which allows players to purchase videos of themselves playing the Laser Maze and share it across social media platforms.”

“We are regularly incorporating customer feedback into our product. Beam Buster came directly from observing the younger clientele at one of our customers only wanting to touch the laser beams. Our engineers saw this as an opportunity to make a whole new game play in which the goal is to break the beams and a second game play was born.”

So first into the market, ten years of success, new product developments, international expansion, is time for celebration, surely?

“We mainly wanted to use this anniversary as an opportunity to thank our existing customer base for being loyal to Funovation throughout our 10 years.  They have been very loyal to us and a strong factor in our continued growth.

“Additionally, we are celebrating internally and recognising all of our employees but mostly, it’s business as usual at Funovation; working away at launching our second product.”

The obvious question is, what does the next ten years have in-store for Funovation?

“We’ve built a strong foundation and our goal is to continue to grow from that – launch at least one more new product, continue to enhance and grow our existing product line, and expand into new markets and parts of the world!  Needless to say, we’re very excited for what the future holds.”