Amusement centres and family venues looking for a new type of multi-player attraction could find a solution in a traditional English game that has become huge in Scandinavia and the US and is now taking root in trendy bars in the UK. Dan Mortimer, sales and marketing manager of its UK distributor, explains the growing appeal of Shuffleboard…

Shuffleboard is an old English game that was banned by Henry VIII, its variants include Shove Ha’Penny, Deck Shuffle (The style played on cruise liners) and American Shuffleboard which is the most popular version of the game today. The game is extremely popular in the US and Scandinavia and as its official distributor, European Shuffleboard is hoping it can popularise it in the UK.

The game is played by two teams with up to four players in each team. The target is to slide the pucks into scoring zones at the end of the 22’ long tables, whilst defending your own pucks and trying to knock the opponents off the table and in to the gutter. The tables are Canadian maple and the pucks glide on a thin layer of silicone shuffleboard powder giving the effect as if the pucks are on ice. The boards are slightly concave meaning you can bend or swerve pucks around opponents meaning some skilful trick shots can be played but if you’re an amateur the table can help correct some wayward shots.

It has proved as popular with women as it is with men which is unusual for a bar game hence the spreading popularity. It’s also popular with business owners thanks to the income the boards generate. Kids through to pensioners can play as well as people with limited mobility, which is why European Shuffleboard has sold the Shuffleboard tables to a wide range of venues across the US and Scandinavia including youth clubs, student unions, amusement arcades, bowling alleys, pubs, bars, restaurants, hotels, holiday parks and even old people’s homes. 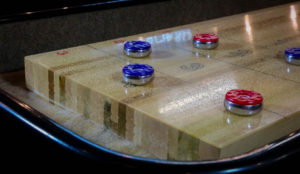 It’s hard to find a pool table in Scandinavia any more as you can get two shuffleboards in the same area you’d get a single pool table when you consider the queueing action space at each end, but with 16 people in the same space cheering, laughing and clapping the firm predicts that it will be the next big thing in family entertainment.

Currently the Shuffleboards are only in a handful of venues in the UK as it’s a new market for 2017, however, across Scandinavia there are now thousands of units and the game has proven so popular in Europe that the factory in Texas now exports more boards here than they supply to their home market.

Not many people in the UK know what Shuffleboard is despite it being an old English game so we are targeting the pubs and bars initially to help spread the word and get people playing the game. Due to the games mass appeal to all ages it makes sense that our next target markets will be hotels, holiday parks, family centres, amusement venues and bowling alleys.

We recently exhibited at EAG show in London and the feedback from the buyers was fantastic. Many commented on how refreshing it was to have something genuinely new on the market and especially a game that can be enjoyed by the whole family. From the show have now trials agreed with three of the UK’s largest pub chains, one hotel and a sports centre,

We are targeting bars and pubs first as that’s our quickest route to market. We need the public to know the game exists so we need venue proliferation and from there we can expand in to other sectors. After this initial activity, the next sectors we intend to target will be hotels, holiday parks and amusement centres. 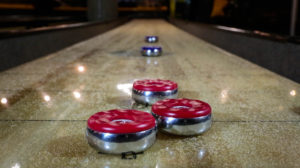