Developing technology, more flexibility in set-up, theming and licensing are all contributing to a broadening of the bowling market beyond its traditional image. Ronnie Dungan finds out what is driving these changes….

For decades now, bowling alleys have been one of the great American past-times. Iconic, central to youth culture, somewhat dismissed as a serious sport, but an obsession for many, many others and an enduring part of life in the US and, increasingly, elsewhere.

But as technology brings advancements and operators seek to broaden the appeal of the sport, bowling’s future may no longer lie in the traditional bowling alley as we know it.

The rise of the family attractions market has seen bowling break out beyond its male-oriented, blue -collar, image towards being a family or group past-time for the casual bowler.

A recent Experian Simmons National Consumer Survey found that over 51 million American adults aged 18 and over, and 19 million youths aged 6 to 17, bowled at least once in the last year.  Bowling clearly is gaining in popularity as 2016 represented the ninth consecutive year of growth in participation.

A significant portion of that increase resulted from heightened interest from women and younger bowlers.  Since 2007, the number of adult women bowling has shown an increase every year while participation among 6 to 12-year-olds has also grown steadily, according to Experian Simmons.

Moreover, 10 million consumers classify themselves as “frequent bowlers,” those who bowl 12 or more times a year, a notable base of loyal customers.

Its traditional image as a sport appealing to working and lower-middle-incomes no longer applies. Several recent studies have found that the largest number of bowlers, both casual and serious, is found in higher socioeconomic households.

“Consumers in households that earn more than $100,000 are the largest market for bowling centres”, according to a recent report issued by market research specialist, IBISWorld.

By 2019, IBIS projects that 25 per cent of all US households will have incomes over $100,000, which bodes well for the future of the bowling industry. 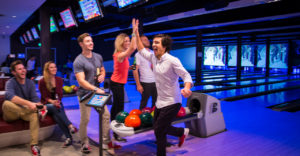 Several other recent US surveys have verified bowling’s growing appeal to an upper-income clientele.  For example, the Experian Simmons National Consumer Survey found that the median income of a bowling household is over $76,000 per year, and more than 28 per cent of all bowlers have household incomes exceeding $100,000 per year. Some 64 per cent of all bowlers are homeowners and almost 60 per cent earn their living in professional fields.

In short, the profile of the average bowler is changing.

Gary Smith, VP of international sales for Brunswick Bowling Products says: “For new centres over the past decade, the majority of development in the US market has been family entertainment centres. This is where the market has shifted, which is why an increasing number of traditional bowling centres are making changes to become family entertainment centres as well. The same is happening in some international markets and we expect this trend to continue and spread further around the world. 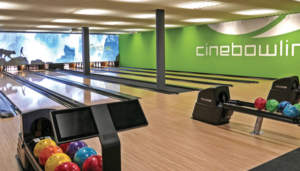 Switch Bowling’s marketing director, Cynthia Winterhalter, agrees that older alleys need to modernise: “If the traditional bowling alleys are not modernised, these tend to be left behind. Switch can help, we leave no centre behind, we know what is required to help modernise a centre and bring it into the 21st century, and at a reasonable price too.”

But, of course, for legacy businesses refits can be expensive and may not necessarily be what their loyal customer base wants. But Smith believes investment levels are not necessarily prohibitive

“Many proprietors understand that for them to deliver on what today’s customers are looking for, they must invest more in order to achieve it,” he says. “Most importantly, proprietors are realising that the payback on their investment can be exceptional.”

But, of course, newer international markets, where bowling may be a new attraction, are where there is serious growth at the moment.

The Federation International des Quilleurs, the international bowling federation, estimates that about 100 million people in almost 150 countries bowl on a regular basis. One hundred twenty-five countries are members of the FIQ and compete regularly in international bowling tournaments. Asia experienced rapid growth in the construction of new centres some years ago, first in Taiwan and Korea and later in China and even war-torn Afghanistan.  Europe, South Africa and Australia also have seen a considerable amount of new construction recently.

And elsewhere, according to Winterhalter: “Switch has had a lot of activity recently with many projects delivered over 2016. To mention but a few, we opened two new centres in Armenia in the capital Yerevan at the end of 2016. We also installed our kids’ bowling alternative, the Switch Mini Series in Kazakhstan. We are also currently starting the installation for Turkey’s largest ever, 38 lane, Federal bowling centre, which plans to host many National and International tournaments.

“Switch has invested in opening a new Sales office in Istanbul, the business capital of Turkey, which will help bring us closer to existing and potential clients. We have also invested in a new joint venture distribution company in the US, which we are very excited about.” 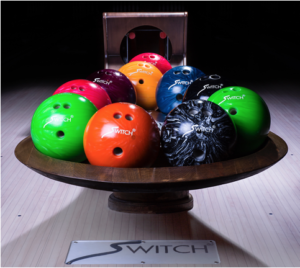 The partnership, with John Fatigati, the proprietor of Jersey Lanes in Linden and Parkway Lanes in Elmwood Park, New Jersey, and president of the North Jersey BPA, aims to bring its European bowling products to the American market

He says: “There is a huge base of centres that are now seeing the need to upgrade and are willing to make the investment as the market continues to heat up. Europe may have the straight line growth numbers, but the US has the foundation in place.  As the market evolves and centres continue to upgrade to the latest style and technology, thee younger generations are really connecting to the interactive social activity in this very digital age.  Currently, we are going to be supplying pins from the States, and as the company evolves, we will always assess the best product for the best price, and take the lead from our strong global presence to always be on the forefront of style and technology.”

With new features capturing a new family audience and variations on the game bringing it into new locations, plus the addition of licensed gameplay such as Brunswick’s recent Angry Birds licensed product, the game of bowling and, more importantly, the business of bowling, is starting to look very different and very positive.

Round One heads East with new opening

Derby FEC gets the go-ahead