Our US correspondent, Sharon Harris, ponders the popularity of the humble pinball machine in the current world of virtual reality, 3D and fast-paced multi-player online games….

Does pinball have a place in the modern operator’s coin-op mix? Given today’s downloading technology content, is the stand-alone historic flipper machine still relevant or a relic of the past?

The answer depends on who asks and answers that question. Pinball has survived generations of societal and technological changes, but kept pace through its own innovations.

For years, Stern Pinball Inc. (SPI) was the “last guy standing” in the pinball manufacturing world. Sam Stern founded the company in 1930s Chicago; son Gary Stern assumed the reins after his father’s 1986 death. Stern has since continually sold to a viable global niche market by demonstrating that creative pinball has lasting appeal to a wide audience. 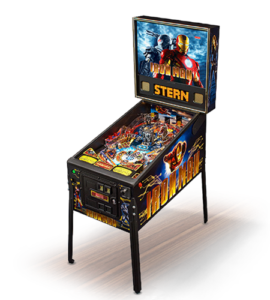 Released in 1931, Bally’s Corporation’s “Ballyhoo” was the first coin-operated table-top “pin game” box that also offered optional legs. It even became part of a campaign slogan for Franklin D. Roosevelt in the 1932 U.S. presidential election. The term “pinball” was first used in 1936.

As the only game of its type aside from pool tables, pinball enjoyed enormous success until they met their match as video games entered the marketplace. Space Invaders and Asteroids in 1979 led to blockbusters Pac-Man, Ms. Pac-Man and Donkey Kong in the early 1980s. A new generation demanded increasingly sophisticated video games, which left pinball manufacturers scrambling to create matching excitement.

As venerable family pinball names like Gottlieb, Williams and Bally either closed or were sold, Stern determined a new direction. Its games have reflected trends and lifestyles of its era, often licensing themes and designs from movie, music or television storylines and characters.

This direction expanded licensing content, which began in 1975 when Bally introduced Wizard. Based on The Who’s Tommy rock opera movie, the game showcases the “deaf, dumb and blind kid” who “sure plays a mean pinball.” Captain Fantastic soon followed.

Guarnieri concentrated on both content technology to build a new, younger player base. His innovations included custom animation and music, voice characterizations from professional actors and movie clips.

The Hobbit, based on English author J.R.R. Tolkien’s The Hobbit, or There and Back Again children’s book, followed in March 2016. Famed American pinball designer Pat Lawlor has filled the new Dialed In game with advanced technology.

Dialed In is the first pinball machine to feature Bluetooth® connectivity, a camera for selfie interactivity and the ability to unlock additional capabilities through a smartphone. It is a far cry from those post-World War II days when “high-tech” electro-mechanical play and flippers caused excitement, later replaced by digital operation.

In prior decades, tens of thousands of units hit street locations and arcades. Today, decreased pinball production requires greater marketing and promotion that makes pinball easily accessible and available to the public. Two successful options are online stores selling vintage and modern pinball games, plus party rentals that introduce consumers to the fun of playing pinball.

In theory, every exposure to pinball will grow a fan base that will keep pinball alive for future generations. So far, despite modern distractions and competing leisure activities, pinball is not only surviving but thriving.

Today’s customers just need to look around to find pinball to play. What a great way to enjoy simple satisfaction from using one’s own skills.

Derby FEC gets the go-ahead