Bandai Namco’s range of arcade machines, pushers, prize games and photo booths,  as well as its distribution of payment and logistics systems make it a vital partner for amusement centres. Ronnie Dungan spoke to general manager, Steve Short, to find out how the company and the market continue to score big with attractions operators in a variety of markets…

When it comes to family entertainment centres, be it a bowling alley, trampoline park or whatever, alongside the main attraction it’s hard for kids to resist the allure of a noisy, brightly lit, room offering driving, shooting, flying, sports and other games. And for dads, it’s virtually impossible.

For many FECs, a good, up to date, arcade offering is a vital revenue earner and can often extend a customer’s stay beyond their main entertainment experience. A quick 15 minutes spent in the games arcade on the way out can really up the average spend per family. And of course, it can also become a major attraction in its own right.

But, as much as there is strong appeal for classic arcade games, it is the latest machines that bring the wow factor and the money. When just about every child in the developed world has a games console of some description, pay to play games have to offer an experience they cannot get at home.

Bandai Namco is one of the global market leaders in the sector, bringing not just games development and distribution but also offering solutions for arcade operators including payment and cash handling. 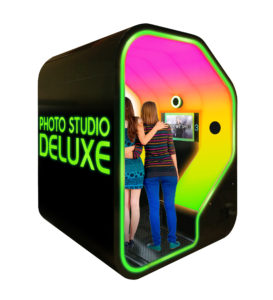 The firm’s general manager, Steve Short, says the market is in a good place right now, offering a number of different experiences outside of the traditional games including prize machines, photo booth technology and more.

“The arcade market is very healthy at the moment,” says Short. “In the UK where we have direct sales of machines and prizes, the feedback we are getting is that the income has been good this year, even with the weather.

“In Europe, there are a number of markets that are performing well. It really comes down to the range of products and ensuring they are tailored for the markets.  We have some great titles this year including The World’s Largest Pac-Man, the DC Comics Pusher and Air Hockey. Then we have Cruis’n Blast from Raw Thrills which is proving to be the best driving game in the UK right now. The Walking Dead is coming through and looking extremely strong. Space Invaders Frenzy with its massive screen and Crazy Tower with its 3D effect offer arcades something completely different. Finally, we have the new Paw Patrol licensed redemption piece and Apple Studios Photo Studio Deluxe, which is a showstopper.”

Short’s division covers Europe and the Middle East, which is a booming market for all sorts of entertainment attractions at the moment, including arcade games.

“Within this region, there are a number of markets that continue to grow and a number that have some issues.  For example, the Middle East is still very strong and as we work with the best possible partners such as Warehouse of Games and Amusement Services International, we get the best representation in the market.  There are a few regions that are struggling, including Russia, this is mainly due to political issues.

“Growth in the strong markets comes from good products and good representation, in order to give operators and investors the faith to invest in the titles.”

Location is also key and with outlets of all kinds now looking to offer a more holistic experience for families, opportunities are opening up in places not traditionally associated with gaming.

“We are constantly reviewing the overall market and looking for places to locate machines,” says Short, “but they have to be the right machines in the right locations.  We work closely with our suppliers to give us the relevant market information and ensure the product is right for our market.”

In the UK, the firm has a division called Bandai Namco Amusement Europe Services, headed by Chris Bell.  It offers flexible supply of machines and service in the UK, working with some of the premier brands in the market including Hollywood Bowl and Tenpin.

Of late, Bell and his team have been expanding into new markets by working with the customers to select an offering that best suits their customers.

“We then share knowledge and information with our customers in Europe in order to help refine the game selection and income of the game,” explains Short.

The emergence of dedicated family entertainment centres has undoubtedly been a good thing for Bandai and the market in general, although Short says the firm has always had a family offering at its core.

“It has certainly been good for us as it is what we are known for. Family entertainment is nothing new in our sector, it has been around for a long time.  We need to offer something for everyone.

“We listen to feedback from the market and our stakeholders, who are of course the players, the operators 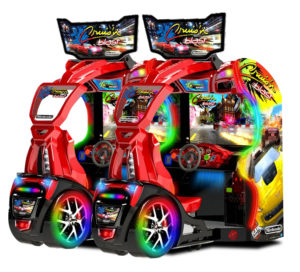 and the distributors. In turn, we feed this back to our parent company (Bandai Namco Entertainment Japan) and partners such as Raw Thrills, Adrenaline, Andamiro and Apple Industries, in order to refine the development of future products.”

James Anderson, the firm’s sales and commercial director, says it is having a strong year with new licensed games and new approaches to classic titles.

“Cruis’n Blast by Raw Thrills is the number one new driving game for 2017,” he says. “The feedback from the market has been very good and when tested against competition in the market it has excelled, however the Mario Kart GP is still very strong too.

“The Walking Dead is no doubt the strongest video shooting game of 2017.  There was some scepticism about the nature of the content of the game being a little too graphic but there is a setting in the game to it tone down.

“World’s Largest Pac-Man (BNE) and Space Invaders Frenzy (Raw Thrills) – both of these games have 108” LED display screens and have outstanding income.

Finally DC Comics 4 Player Pusher has been outstanding.  The game was a joint development between BNAE / BNAA and Andamiro.  It’s a closed loop pusher that vends tickets and collectable cards featuring DC Comics characters.  The strength of the brand has been astounding due to the strong movie release schedule and also the TV and animations using the brands.   This is the start of a range of DC branded goods and we are now launching an air hockey table  – Jokers Wild – working in conjunction with SAM Billiards of Spain.”

The firm also has a number of distribution agreements in place to handle products such as the Embed payment system and other crucial logistics systems. It might be the less glamorous end of the sector, but it is nonetheless, vital for operators.

“Distribution has always been a big part of our business,” says Short. “We like to align ourselves with the best in market brands such as Embed & Deltronic to add to those James has spoken about.

“Cashless systems have taken a while to come into the operators minds but with banks declaring war on cash transactions in the national press this will only emphasise the move towards a cashless environment within the amusement sector. The benefits are starting to outweigh heavily the arguments against systems such as Embed and with enquires come through daily it seems the UK market has woken up to the shift in public trends.”

At the more exciting other end of the market, virtual reality is once again being vaunted as the next big thing in arcades, with Bandai in Japan investing big money in its flagship Tokyo VR arcade,  but Short seems sceptical about its long term appeal.

“I don’t know if I would go as far as saying it is the future.  The technology is certainly new and state of the art, as can be seen in the Bandai Namco flagship location in Shinjuku Tokyo.  However, it is still early days for the market.  I feel it is complimentary to the current products on the market and an excellent addition to the portfolio for family entertainment.”

What VR does offer is something that is central to the ongoing appeal of arcades, which is a better, or at least, different experience to home game systems. When graphics and gameplay are now on a par and even TV screens are almost the same size, an arcade game has to offer an alternative form of excitement often in a shorter time frame. The espresso to the console’s latte, if you will.

“They target different markets and therefore are developed as such.  In Amusement we are looking to offer three to five minutes of entertainment for a low price point.  Home game systems tend to be developed to offer 18 to 24 hours game play over a longer period of time.  On some products they can be complimentary.  Also in terms of amusements, we have World’s Largest Pac-Man and Space Invaders Frenzy.  These machines use a 108” LED screens.  There was scepticism in the market about the titles, however, the income from both of them has surpassed expectations.  I believe this is due to the out of home experience e.g. playing something that cannot be replicated at home.” 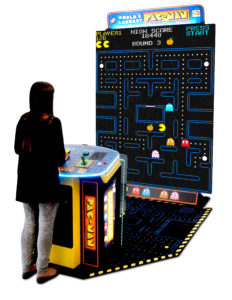 There’s no doubt that the World’s Largest Pac-Man and Space Invaders games are impressive, eye-catching, installations. And it is that sort of development, tapping into the arcade’s golden years heritage, but adding excitement through technology, that keeps the market relevant.