New product can be operated through a mobile phone

EAG will see the launch of a new video music option from Playdium that is backwardly compatible with its current system.

Launched in the UK little more than a year ago, the Playdium combines sleek design with intuitive navigation and includes a digital amp designed and built by B&O, with a connected mobile app.

Commercial director, James Luck, explained: “The Playdium arrives at EAG on the back of a hugely successful fourth quarter of 2017 when operators of all sizes have been placing repeat orders having experienced its income earning potential, in no small way boosted by the power and appeal of the TouchTunes mobile App.

“The App gives the user total control, enabling him/her to take on the role of DJ and play the jukebox from their phone. This marriage of smartphone and smart jukebox transforms the player experience, bringing the jukebox bang up to date in terms of what the ‘Spotify Generation’ now expects. As the App links into users’ Apple Music and Spotify accounts it makes music selection an incredibly straightforward process. 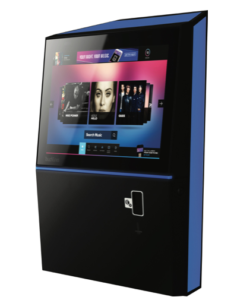 “In the US the App has recorded an incredible six million registered users, with new sign-ups averaging 25,000 a week.  The broader marketing opportunities presented by the App and the data it generates are of huge significance. It transforms the jukebox into a dynamic and powerful marketing tool, in the process placing music centre stage. Playdium engages with modern consumers in a compelling, relevant way and in the process enhance the profitability of music.

“The system is built for full HD installs: so as long as the video was originally in HD the quality of the clips are on a par with Sky Sports HD. The video player connects independently to the  Playdium which allows real flexibility for operators when installing and removing while still maintaining the original jukebox on the wall.

“We’ve been very pleased with the last 15 months following what was a three-way initiative undertaken by TouchTunes, Soundnet and Sound Leisure. We set out to rejuvenate the jukebox sector and whilst this is a long journey, we’ve moved a fair way down the tracks. Some predicted that Playdium could only work in specific niche locations or areas, but that has not been borne out by the facts. Operators have backed Playdium in numbers, with many describing Playdium as the most advanced and user-friendly jukebox not just for today’s consumer but for also for the consumer of tomorrow. Playdium has not only become the stand out jukebox but it is also helping to put music back on the radar as a really important part of the entertainment mix.  TouchTunes is fully committed to a programme of continuous innovation which means that operators are buying into a product that will continue to evolve.”

EAG 2018: Inmotion on the move with VR platform