Bandai Namco Amusement Europe will once again have one of the largest booths at this year’s EAG, featuring the different divisions of the company, including Games, Prizes, Virtual Reality, Management Solutions, Operations and Entertainment Projects, as well as international sales staff, distribution and manufacturing partners.

“EAG provides the opportunity for us to set our stall for 2018,” said James Anderson, sales and commercial director BNAE. “We have tested a number of the new releases seen at the IAAPA show, which we felt would be ideal for our markets and these can be found on our stand, alongside some brand-new developments, which we are very excited to show for the first time.”

Site testing has already begun on Spinner Frenzy, new from Adrenaline, which develops the global ‘spinner’ craze into a skill redemption game, where players must find the right speed to spin in order to win tickets.

Also from Adrenaline is a new centrepiece game featuring Ubisoft’s Rabbids characters. Rabbids Hollywood is a four-player video game title with a 120-inch screen. Players must try to stem the invasion of Rabbids in three different movie sets using a number of methods, in a tin-can alley shooting style game.

From Raw Thrills, BNAE will show Injustice Arcade which features the characters from the recent Justice League film. This game is licensed by Warner Brothers and is a classic button style three versus three tag team fighting game, with a twist as it offers a collectible card after every play featuring one of the characters in the game.  The player can then use the card the next time they play the game and the character will appear in the game.

Also from Raw Thrills is a new snowboarding game, X Games Snowboarders, which will continue the success of SnoCross. It features a realistic snowboarding experience in a stand-up cabinet, which includes wind effects and five downhill tracks for players to try. 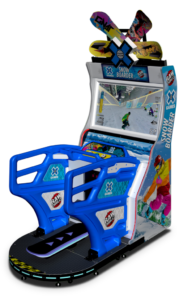 SpongeBob Pineapple Arcade from Andamiro will be joined by SpongeBob Soccer. The attractive branded cabinet features a large lever topped with a football. Players must flip the lever at the right time so that SpongeBob can kick the ball into the goal – past the arms of Squidward who is goalie.

Visitors to EAG can also expect to see the Triotech Typhoon simulator ride, which continues to be the top coin-op ride of its kind on the market involving motion, win and high-quality movies, making it an arcade must-have. Also on show will be the Apple Scene Machine Version 2: which embraces green screen technology to deliver an interactive photo booth experience like never before.

Virtual Reality will also take a leading role on the BNAE stand this year with its own section of the stand. The AiSolve WePlayVR attraction will be available with the Mayan Adventure Software and the firm will also show the first update software called Alien Adventure.

“The reaction to WePlayVR at IAAPA was off the scale – we had thousands of people play on it during the show with queues throughout, and are still following up and finalising the sales leads” said Matthew Bradley, VR project manager at Bandai Namco.

Prize and plush continues to grow in strength for BNAE and the market-leading DC Comics range is expanding with a new ‘Villain Mix’ which is due for release in February.

“Everyone loves the villains and so we have created our own special mix, which will sit alongside the popular Justice League and Super Girls character mixes,” added Darrell Simmonds, EMEA sales manager.

There will also be some new My Little Pony characters based on the stars of the movie and future TV series – these will complement the existing range of ponies and includes a completely new pony.

“Big news for us on the plush side will be the range of Early Man characters which we will have at the show,” said Simmonds. “Early Man is the latest Aardman movie which is due for release on the 26th January in the UK. Publicity is already everywhere, with high profile advertising tie-ups over the festive season and a massive marketing push. This is the licence that everyone is talking about.”

Cashless and loyalty card systems from global supplier Embed are available exclusively in the UK and Ireland from Bandai Namco Management Solutions. The team will be on hand to discuss the many benefits of going cashless. In addition, Management Solutions supply the market-leading Deltronic ticket eaters.

“The whole team at BNAE and our partners are looking forward to another successful EAG Show. We believe this year’s line-up of games, prizes and supporting systems and services are second to none, so we can’t wait to welcome visitors to stand 620,” concluded Anderson.