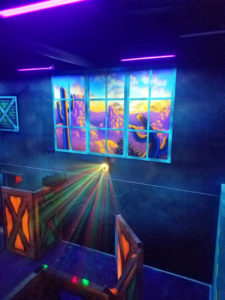 “Gary wanted to do laser tag,” said Creative Works creative experience broker Marsha Brentlinger. “He was adding on to his building and he wanted to expand his arcade. Gary visited our Theme Factory to look at a couple of themes and decided to go with our ‘Area 51’ look.”

“They saved us money and time by reviewing our plans before construction began and pointing out problems before they happened.”

The two-story, 3,110-square-foot arena brings players into an industrial warehouse filled with steel structures and alien technology. Extraterrestrial panels and barrels with alien markings are scattered throughout the building. A large, hand-painted window mural hangs at the top of the arena showcasing the desert landscape of Roswell, New Mexico and a massive beacon stands in the middle of the arena, calling out to other alien life forms that may be listening.

“It turned out to be a great arena,” Brentlinger claimed. “He was very pleased with it and they’re seeing fantastic results with it; it’s working very well for them.”

From financial advice to the final install, Creative Works worked with Alstott from start to finish of the project.

“The team at Creative Works was great to work with from start to finish,” stated Alstott. “The education and support they provided during the entire project was awesome. They saved us money and time by reviewing our plans before construction began and pointing out problems before they happened. This was a great help to us and the building company.”