UK FEC chain 360Play has just opened its sixth centre in Farnborough, following the firm’s same carefully constructed and successful play formula. Ronnie Dungan went to the launch to catch up with boss Duncan Phillips and find out more about the group’s approach.

The opening of 360 Play’s latest centre is the firm’s sixth and will be its final one in a year which has also seen it unveil a smaller footprint version in Redditch. Well, Christmas is on its way, isn’t it? The boss needs to start shopping not filling in planning permission forms.

The 25,000 square feet Farnborough play venue features 17,500 square feet of play space, with the capacity to hold 500 people at a time. It is the FEC chain’s sixth opening following Stevenage, the aforementioned Redditch, Milton Keynes, Leicester and Basildon. 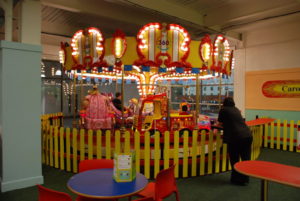 “This is a really good site, with good flow and good communications, which is key. We’ve been looking for a site on the M3 Corridor for a few years, but that’s how long it can take sometimes,” said 360 Play boss, Duncan Phillips.

“I don’t need to tell you how affluent this area is. The town centre is also undergoing a regeneration strategy. So it’s good location for us.”

Among the key attractions are a three-storey play structure, family bumper cars and a carousel.  The rides are supplied by specialist Italian manufacturer IE Park/SOLI Bumper cars which has supplied the same attractions to all the previously opened centres.  Additionally, the 360 Street creative play zone, a key feature at all 360 Play sites, is made up of individual play units such as a fire station, supermarket, pizza parlour, vets, car garage/body shop and dressing up shop. There is also a party zone offering a dedicated area for children’s parties.

This is a really good site, with good flow and good communications, which is key. We’ve been looking for a site on the M3 Corridor for a few years

The firm’s other opening this year was a smaller footprint site, at the Kingfisher Centre in Redditch. It was the firm’s first in a retail centre location and features a two storey indoor play frame, toddler zone, dodgems, carousel, 10,000 square feet 360 Street play zone, messy play area and cafe.

Next year, there are plans to open another centre at Rushden Lakes near Kettering and Northampton. But that’s about as far as you will get asking Phillips about openings and future plans.

“I don’t tend to talk too much about scheduling and the numbers we’re opening,” he says,”because nine times out of ten you’re not in control of that because of planning, availability etc.” 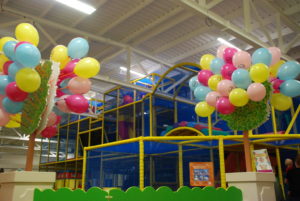 The Redditch site is something of an experiment for the firm, as it looks to find out how a leisure experience works in a retail environment.

“Until Redditch has done a 12 month cycle we won’t exactly how it has performed in terms of a full set of data, but we’re very pleased with it so far. You can do as much research as you want but you can’t tell until you’ve built it.”

Bad news for northerners though – they are unlikely to be getting a 360Play anytime soon. There are two reasons for that. Firstly, the centres are targeted at areas of a different demographic nature, i.e more affluent areas, but secondly, and this is the bigger factor at play, its too far from the boss’ house.

Being the master of all he surveys and having no shareholders or board members to answer to, Philips is able to control the pace of the firm’s expansion, or indeed whether it continues to expand at all, and precisely where it expands.

“Because it’s my business I can take it in any direction I want. There’s no pressure from shareholders or directors,” he explains.

And frankly, the existing business is within easy reach of his base in Milton Keynes, so he’s not about to go shooting up the M6 in the near future. It’s a lifestyle balance. Or something.

The build for each 360Play follows the same pattern. Everything is built in-house at the firm’s Linford Wood studio near Milton Keynes, with the exception of the play structure which is by SPI. Formerly it was Italian firm IE Park. 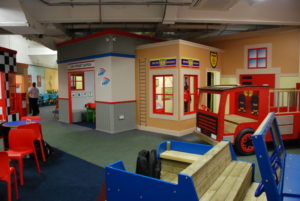 Off-site build normally takes four months and then 3-4 months on-site build. So it’s a build time of around nine months between finding the site and opening the doors.

The membership format of 360 gives DPA access to huge amount of customer data, including how much people spend, how often they use a 360, how much time they spend there, what activity classes they book and so on.

So it enables access to a very powerful marketing tool, which can communicate one to one with each customer according to their habits. Each centre also has its own social media communications too.

One thing which is clear with 360Play is that unashamedly formulaic, with tried and tested methods and activities that work in each different centre. It does not deviate from what works well.

So you won’t find any screens or electronics toys, or character licenses.

“If you’ve got character license you are effectively giving your brand to somebody else. Those IPs can be very profitable and have revolutionised a lot of parks, but you have to understand it’s not your IP. You’re handing over control.

“There’s no technology in here either. The biggest challenge is how to get kids off the iPhone or iPad. When parents come in here they all get their phones out straight away but after 90 minutes they all put hem away.”

Also crucial to its success is maintenance. It’s vital that each centre does not succumb to the grubbiness that having several hundred excited children coming through every day can cause. It does not want to be the type of play centre that can bring down the reputation of the industry, which nearly everyone has had a (mostly bad) experience of.

“The wear is big, which is why we have our own development team. Every year we are painting and changing concepts and to do that you need to take the maintenance in-house. We do a major refresh every two to three years.” 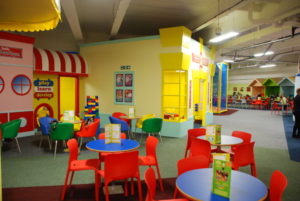 The future for 360Play is more carefully chosen openings, according to what Philips wants to do with the business, and more success with the same.

It’s a simple question of if it ain’t broke don’t fix it. Or if it is, send along the in-house maintenance team.

Could it be magic?