Blackpool Zoo is celebrating a decade of multimillion-pound investment with Parques Reunidos.

The Spanish leisure giant bought the zoo in 2007 and, as a result of on-going investment, the attraction has enjoyed continued growth in visitor numbers, memberships, revenue and profit.

Della Belk, PR and Marketing Manager at Blackpool Zoo, said: “When Parques Reunidos took over Blackpool Zoo in 2007 it heralded a new beginning for one of Blackpool’s most iconic attractions. Continued investment in animal and visitor facilities means that there is always a reason for visitors to return and see something new.

“We have enjoyed incredible success in the past decade and we are already in discussions about more exciting projects that will take place in the coming years. The future certainly looks bright at Blackpool Zoo and we look forward to another great season ahead.”

First on the list of upgrades in 2007 was an overhaul of the big cat outdoor paddocks, followed a year later by a new home for giraffes, a development of the car park and the introduction of soft play facility the Playbarn.

Penguins returned to Blackpool for the first time in over ten years. As part of the first phase of the Active Oceans Arena, 20 Magellanic Penguins settled into their new pool and beach area in time for the summer. 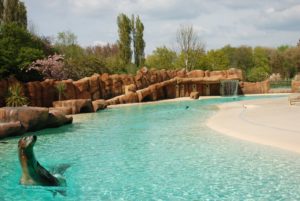 The aardvarks were also treated to a spruced up pad in 2009 before work began to introduce a new walk-through enclosure called Wallaby Walkabout in 2010.

A new toilet block, to accommodate the growing number of visitors, was also completed in 2010 with an upgrade to the main eatery, Lakeview Café taking place in 2011.

In 2011  a huge Children’s Farm was built, featuring chickens, rabbits, goats and pigs.

There were two new headline arrivals in 2012 as Iberian Wolves and Giant Anteaters made their zoo debut in new, purpose built enclosures.

The following year saw the introduction of Starbucks and a further extension of the café terrace.

Next on the list was a huge project that resulted in a brand new home for the zoo’s family of Bornean Orangutans.

The £1million Orangutan Outlook investment saw the ape house, which was originally built in the 1970’s, triple in size to make it wider and higher with an upstairs viewing area and extended keeper facilities. At the same time, a brand new Orang-u-tangle play area was built for children to enjoy outside the ape house.

The Playbarn was upgraded again in 2015 and work began on a new Education Academy, which opened its doors in 2016.

Over £100,000 was invested to expand the facility to create three state-of-the-art classrooms for people of all ages, from early years foundation level to adults.

Ground broke on Blackpool Zoo’s biggest and most ambitious project to date in 2016. The multimillion-pound scheme, dubbed Project Elephant, will see one of the UK’s largest elephant houses built on formerly disused land.

In addition to the building there will also be a three-acre outdoor area, which will include a huge pool as well as grassed and sandy paddocks. The grand opening will take place in summer this year.