Tesla Tower is now in production and available for immediate shipment. The original Tesla Tower was an early wireless transmission station designed and built by Tesla in Shoreham, New York in 1902.

Benchmark’s Tesla Tower is a skill stop light game where ticket values are increased for each level achieved with a progressive bonus feature. It has been monitored at test locations, boasts a modest foot print, and is easily maintained by operators as it has no motors, solenoids, or mechanical parts.

Features include a panoramic LED light playfield, and marquee light component that is synced to game play.  It is the latest addition to the firm’s value-priced and high-earning games line, including titles such as Monster Drop Single, Pop It & Win, Free Throw Frenzy, and Buzzer Beeter. 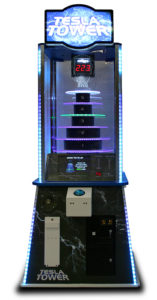 “Tesla Tower, with its 360-degree visibility, LED light package and mesmerising game play, is an instant game room show piece.” said Paula Rinker,  vice president of sales, Benchmark Games. “It has been specifically designed to add high impact for a value price.” Al Kress, President of Benchmark Games, adds, “Tesla Tower is the newest and exciting game to add to our tradition of building the industry’s most profitable games. Our games are high earning, hold their re-sale value, and enjoy long lasting customer retention. You rarely see a used Benchmark game for sale in an auction or listed in back of an industry trade publication”