Earlier this year, BNAE opened its first Virtual Reality location outside of Japan – in the new Hollywood Bowl at London’s high profile O2 – which was the first location to be chosen outside of Japan to begin the roll out of VR ZONE Portal worldwide to maximize this innovative technology globally. 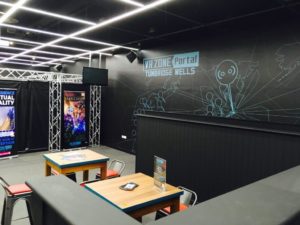 Hospital Escape Terror sees players restrained within a wheelchair in a creepy, deserted hospital ward. All participants must work together to escape. Argyle Shift places the player as a test pilot on a mission to drop a space ship into a designated zone, with the help of ‘Eine’ an Artificial Intelligence humanoid friend.

The Big Fear of Heights Experience sees players enter the elevator of a city hotel, the participant, who is wearing a headset but is free to move around, ascends 200m to the 40th floor way above a busy city. Upon exiting, they must walk across a narrow plank to rescue a kitten – physically pick it up with the wind and sounds of the traffic below and return with it to the ground floor.

“The opening of VR Zone Portal Tunbridge Wells is confirmation of the growing rise of Bandai Namco’s Out of Home VR concepts and we will continue to see a roll-out of more innovative experiences and exciting VR Zone Portal openings throughout the UK,” said Steph Jones, VR training and marketing assistant.

“Our strategy for the early part of next year is to include at least two brand new additional VR titles into both VR Zone Portal’s within the UK to follow on from the initial experiences we already have. We also plan to roll out a third location within the first part of next year. This schedule shows the demand and success being enjoyed by the Bandai Namco Entertainment Inc. innovative leading-edge VR technology. It is certainly at the top of its game in comparison to other VR experiences currently available here in the UK”

Intercard installs in Round 1 FECs