IAAPA build up continues with announcement of Bandai's show plans

The build-up to IAAPA continues, with Bandai Namco the latest to reveal its show offering, which will include everything from mechanical redemption games through to the latest VR developments.

Visitors to the stand at IAAPA will be able to see a preview of the VR Zone experience from the Shinjuku Japan location, and hear more about the roll out of locations including the ones in the UK in London and Tunbridge Wells in Kent.

It will also show the AI Solve VR platform which it is now distributing with the existing Mayan Adventure game and also some new software highlighting the development programme for future games. 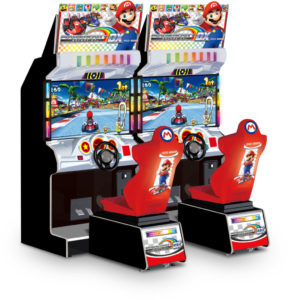 Other Bandai products at IAAPA will include Jumbo Jumpin Jackpot, building on the success of the original Jumpin Jackpot skipping game from Namco, the updated version is 50 per cent bigger and brought up to date with the latest LED technology and linkable game play

In addition, there will be the Pac-Man Battle Royale four-player incorporating a huge projector screen for added impact.

BNAE will also have Galaga Assault, the ticket redemption machine produced in collaboration with Raw Thrills along with the pioneer of the 108” LED display products, World’s Largest Pac-Man bringing the classic game back and allowing operators to use the impressive display as an advertising board when players are not playing the game and between levels.

There will also be a surprise new redemption title shown for the first time, which is currently still under wraps.

Titles from partner manufacturers for the European and EMEA markets, include Cruisn’ Blast, from Raw Thrills, and also from Raw Thrills, Walking Dead and Space Invaders Frenzy with its massive108”  LED display.

From Adrenaline Amusements, there are four new titles, the first being Mega Crazy Tower. Following on from the success of the Crazy Tower launched last year, the new model is bigger and better.  Spinner Frenzy will be on show, the game is a mechanical redemption game based on the global fidget spinner phenomenon.   And another two titles will be a four-player video redemption game and the final one will be Adrenaline’s first foray into a pure video game.

Andamiro will have Despicable Me Jelly Lab on the stand –  a closed-loop coin-roll game with collectable cards. Andamiro will also show a new SpongeBob-branded mechanical redemption game with a soccer theme called SpongeBob Soccer Stars and finally there will be the launch of Tight Rope a video redemption title using a unique controller

Darrell Simmonds, EMEA Sales Manager of the Prize Division will show a range of product at IAAPA, including a number of DC Comics-branded items, such as the Justice League movie plush mix in time for the film release in November. In addition, he will show the DC Comics Villains Mix, to coincide with another movie release next year. The My Little Pony Movie Mix will be available for European markets to fulfil demand created by October’s movie release.

Its plus range will feature Aardman’s Early Man, which is a new title from the creators of Shaun the Sheep and Wallace and Gromit, with a football theme. The film will open in the post-Christmas season in the UK and in February and March for Europe and Oceana.

BNAE has exclusive rights for the amusement and retail sectors for this range in Europe, Australia and New Zealand. In addition, there will be a range of DC Comics, My Little Pony and Pac-Man gifts. Pac-Man gifts are available exclusively in the US through Sure Shot Redemption and the Pac-Man plush and pillows are available in the region through Toy Factory.

The BNAE Project Division is anticipating a busy IAAPA. Led by Darius Kaskelis, he will be showing clients a dossier of turnkey designs, including Pac-Man Zone IP locations, which have been successfully completed this year around the globe, as well as a number of new contracts, including a project for outdoor space in Nigeria.

Finally, Steve Short from Bandai Namco Management Solutions will be on the stand to see his UK and Irish customers and display the Embed cashless and redemption management system and SmartTouch debit card readers.

Your next big thing…hatchet throwing?