BNAE division Bandai Namco Management Solutions, the exclusive UK and Irish distributor for Embed, has completed a full cashless installation using award-winning Embed Smart Touch Readers, which are RFID so customers can tap and play whilst collecting the winnings in tickets back onto the card.

The system was fitted to a mix of redemption, video, air hockey and crane machines at the newly opened state-of-the art 18-lane bowling centre in the heart of the West Quay shopping area in Southampton.

Players can load value on to their cards via the POS terminal at reception, or via the self-service kiosk.

“The customer feedback so far has been very good with the statistics showing there is a high volume of repeat plays and higher average spends than expected,” said Will Etherington of Hollywood Bowl Group. “We are looking at further venues to incorporate the system into with a mix of new and existing sites.”

“As this venue was a new-build it allowed us to prepare the machines with the Embed hardware in advance so install time was kept to a minimum,” explained Steve Short, general manager of Bandai Namco Management Solutions.

“The install was completed with staff from Embed and BNAE and key staff of Hollywood bowl Group. In addition, the centre staff were invited to Richmond prior to the install for one to one training on  the operational aspects for the system.  T 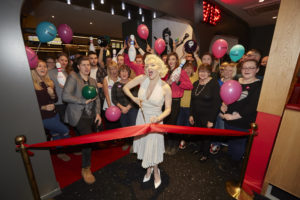 his has made the whole process very easy for them to operate and push the concept to the players on arrival at the centre,” he added.

“From an operational point of view the cashless system translates into fewer calls for coin jams and that means that service staff can spend more time concentrating on keeping the machines in tip top condition. In addition, minimal time is spent on collections, which allows operator access to machine plays and trends on a daily basis rather than waiting until collection day is complete,” added Chris Bell, general manager, Services Division, BNAE.