Andamiro celebrates two decades of Pump It Up 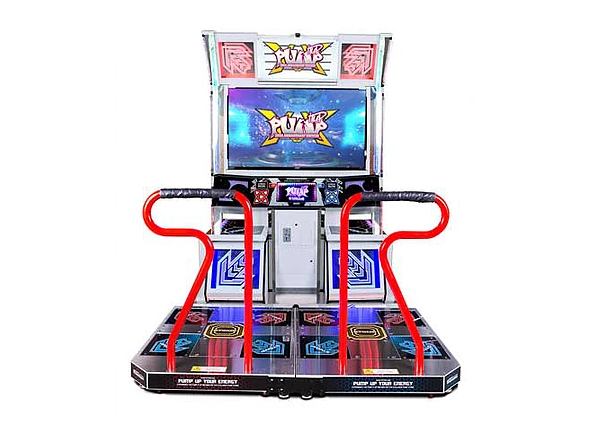 In order to celebrate the arcade classic’s 20th birthday, Andamiro’s Music Business Team has created a completely new software system, adding tons of new music and stunning graphics to mark Pump It Up’s milestone, and to give both dance pros and casual players something special.

Last year’s IAAPA Attractions Expo in mid-November saw more than 40 Pump It Up speed and freestyle enthusiasts (known as pumpers) make the trek to Orlando in order to be the first to try out the 20th Anniversary edition – dubbed PIU-XX.

A Pump It Up trial followed in South Korea in December and final touches were made to the 20th anniversary game in January. Now, Pump It Up 20th Anniversary has been shipping since January 29th – expect to see it in a U.S. game room sooner rather than later!

The world’s No. 1 dance simulation game, Pump It Up was originally released in August 1999 in South Korea. The game immediately became a huge success in its home market, and it soon after reached North and South America, and Europe, as well as other parts of Asia. Today, Pump It Up is a pop culture icon around the world and commands a zealous fan base.

The new edition introduces several features to the player interface. These include renewals for song and step difficulties, and more than 100 reward titles. Both renewals and reward titles are key parts of the XX interface. Renewals allow players to continue (or “renew”) song-and-dance sessions from where they left off. Reward Titles are designations assigned to a player’s user ID; they could include “titles” like “advanced,” “specialist” and “newbie,” among many others. PIU-XX also has an online matchmaking system, which can “match” players of similar abilities and styles.

The 20th anniversary software is shipping in Andamiro’s current Pump It Up LX cabinet equipped with 55″ display. Upgrade kits with the new software and “20th Anniversary XX” marquee are also available; upgrades support PIU cabinet versions CX (43”), TX (55”) and FX (42”), along with the current LX model. Coinciding with the release of PIU-XX for arcades, Andamiro is expected to introduce a Pump It Up mobile version. Dubbed PIU-M, the mobile game underwent an alpha test this past summer in Korea and is expected to begin a beta test soon.

“Pump It Up enjoys a rich history and has a very bright future,” said Andamiro USA marketing director, Nick Montano. “With the 20th Anniversary edition, Andamiro’s development team is at the top of its game and the Pumper community has never been more energized. Additionally, the new game will have greater appeal to casual players.

“A dance game devotee recently explained to me that one of the best attributes of Pump It Up is that it allows players to grow with the game as their abilities advance,” Montano continued. “They can move up through increasing levels of difficulties on the same song for which there can be as many as 30 levels.”