The Vegas show will feature an entire day of panels and seminars, as well as a new VR Pavilion on the trade show floor devoted exclusively to virtual reality. In past years, the Amusement Expo International has embraced other aligned segments such as bulk vending and laser tag, which are now integral components of the annual gathering.

The aim of the VR Pavilion is to educate traditional amusement operators about opportunities and products from the VR attractions market and offer VR companies the chance to exhibit and connect with a large group of new customers who are unlikely to attend other virtual-reality focused events. 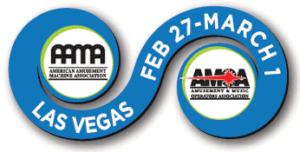 “Arcades will continue to be the locations where most people will first experience VR”, said Bob Cooney, curator of the virtual reality education program for the Amusement Expo International.  “Billions of dollars have been invested in virtual reality startups based on the expectation that the consumer market was poised to explode.  However, with consumer adoption emerging slowly, companies are now flocking to location-based entertainment as a means to showcase their products and build the consumer awareness they hope will lead to greater adoption.”

According to Greenlight Insights, the global leader in virtual and augmented reality market intelligence, global spending on location-based virtual reality entertainment will exceed $8 billion by 2022, up from $579 million in 2017.  Location-based entertainment centres will continue to play a significant role in growing consumer awareness and mass adoption of VR technology.

The new VR program’s educational track debuts on Tuesday, 27th February during the Amusement Expo International Education Day. VR will also be an addition to the core of coin-op, FEC, bulk vending and laser tag areas on the exhibit floor during the Amusement Expo International trade show including the VR Pavilion open Wednesday, 28th February and Thursday, 1st March in South Hall 1 of the Las Vegas Convention Center.

The Amusement Expo International is the annual North American gathering of the coin-operated and revenue generating amusement, music and family entertainment industries.  In its ninth year, it is the largest trade show in the region focused on pay-to-play entertainment for family entertainment centres, arcades, bars and restaurants, and other locations. It is sponsored by industry trade associations AAMA and AMOA.